This year, although we are not celebrating a First Communion in our house, I was provided (at no cost to me) with two First Communion Banner Kits from Catholic Child Catalog.  They wanted me to try my hand at putting one of them together, and then they sent another one so that I could give it away.

(Keep reading, even if you also don’t have a First Communion in your house this year.  I put a spin on the one that I put together so that these kits aren’t only great for First Communion banners, they are also great as a wonderful and inspirational craft project!  You might just want to win one of these after all!)

Catholic Child Catalog carries a great variety of First Communion Banner Kits!  With the kits costing under $20, it is definitely a reasonable investment to save yourself from the time and money of putting together the supplies yourself, especially if you’re not naturally inclined in that area.

I received two kits of the Ten Commandments Design Banner Kit.  Here’s the front of the box: 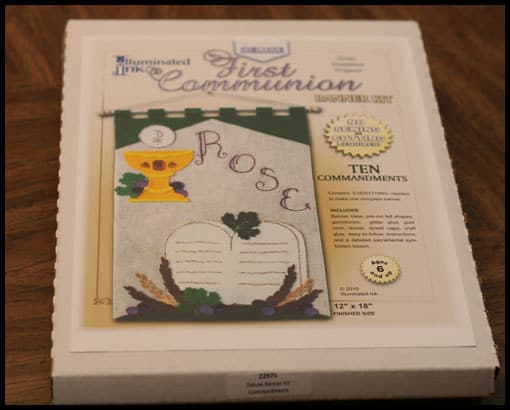 And check out all those supplies inside (I was actually pretty shocked at everything that was included): 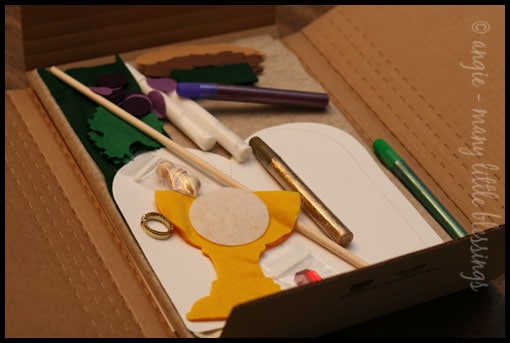 I also liked that there were several pages of written instructions.  Not only does it help those who are a bit craft-challenged, but it gives ideas for multiple ways that you can put your banner together.  My favorite part of the instruction sheets, however, is that it is set up for a parent to do this with their child.  There are things for the parent to read to the child throughout the banner making process.  Even something as simple as putting on six tabs at the top becomes a reminder to your child about the six days of creation before a day of rest.  Both Eric and I were really impressed by those notes. 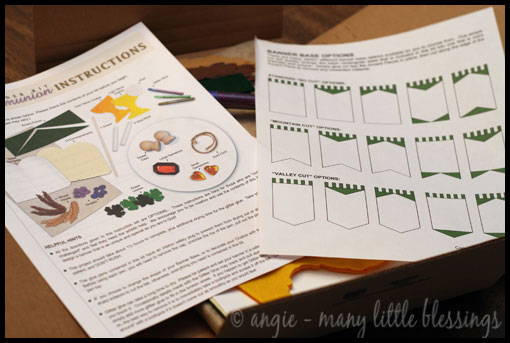 There are many times throughout this project that you will be leaving things to dry.  So, while I think (in theory) this could be completed the day before it was due, that just might be pushing it.  Leave yourself a little time so that neither you or your child gets frustrated while putting these together.  It is supposed to be an enjoyable family time, not a “Hurry up, Susie, or you’re going to your room” kind of thing.  (With that being said, why not just go order a First Communion banner kit right now?)

My point in telling you this is not only to let you know that you will spend a little time on this project, but also so you understand why some of my pictures look different.  I actually did this project over a several day period.  Doing a step, letting it dry, and then coming back to it later.  I really enjoyed doing it like that, and you probably will too.  (Trust me.)

Here’s where I give you another tip — I was impressed with everything in the box, but as I started putting it together I thought, “I’m not going to like this.”  I don’t know why.  I just thought that.  (Want to know a secret?  I really love the finished product, and I can’t believe that I thought I wasn’t going to like it.  I’m thrilled with it!) 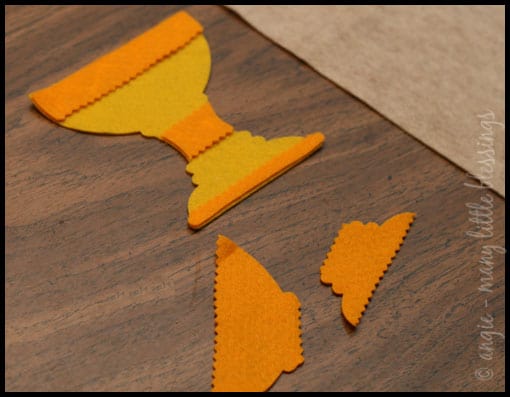 While I’m not going to give a step by step on this banner kit, I’m going to give you some previews of it.  The first thing I did was make the chalice.  I liked that they sent two shapes of different colors.  Then it was up to me as to how I wanted to decorate it, with them giving a suggestion.  I used pinking sheers to mix it up a bit.  (This is code for: All I could find were my pinking sheers.) 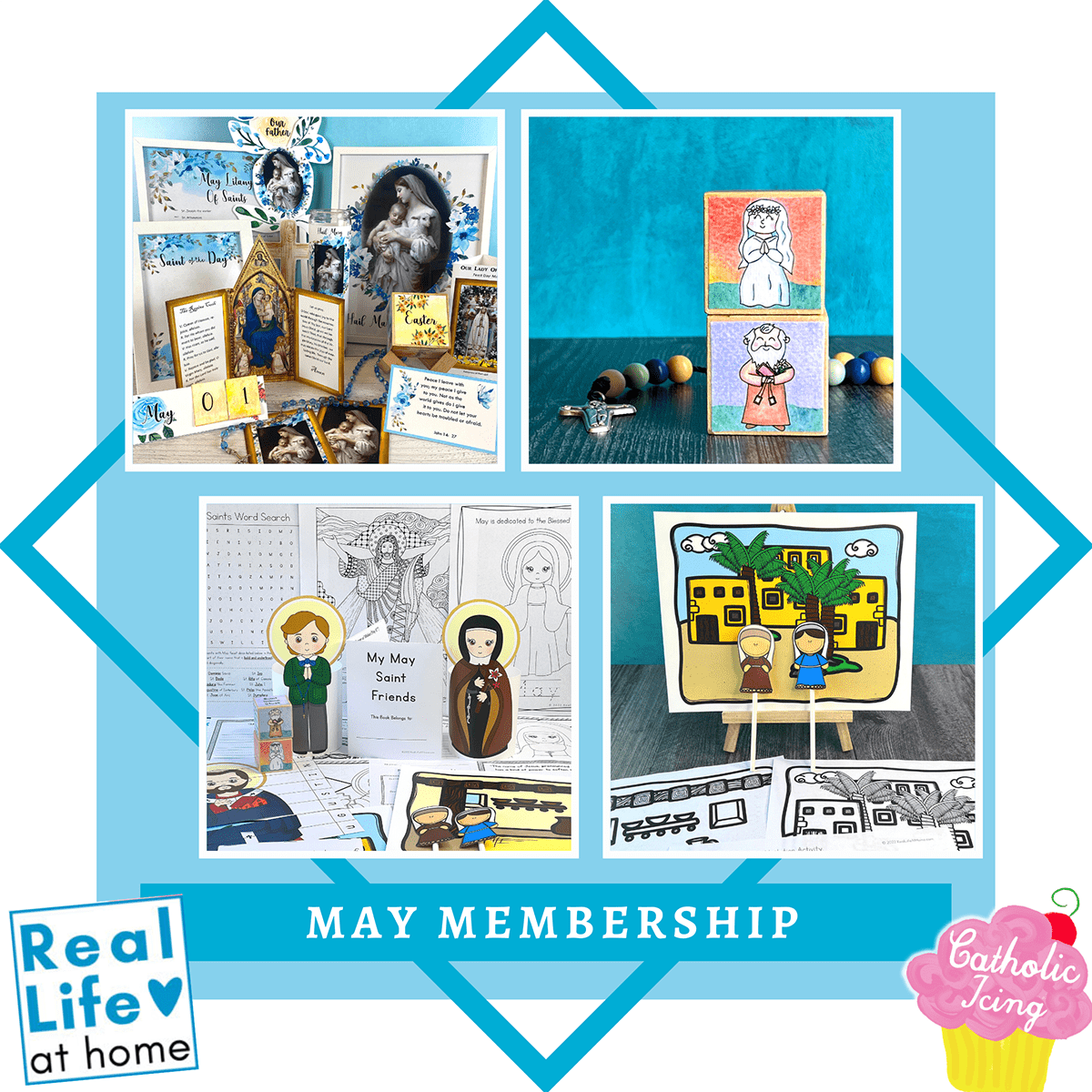 Perfect for families! Each month you gain access to printable activity pages, crafts, home altar pieces, and more.
Never has living the liturgical year been so easy and affordable!
Join now for instant access to May's 100+ pages of printables and resources! 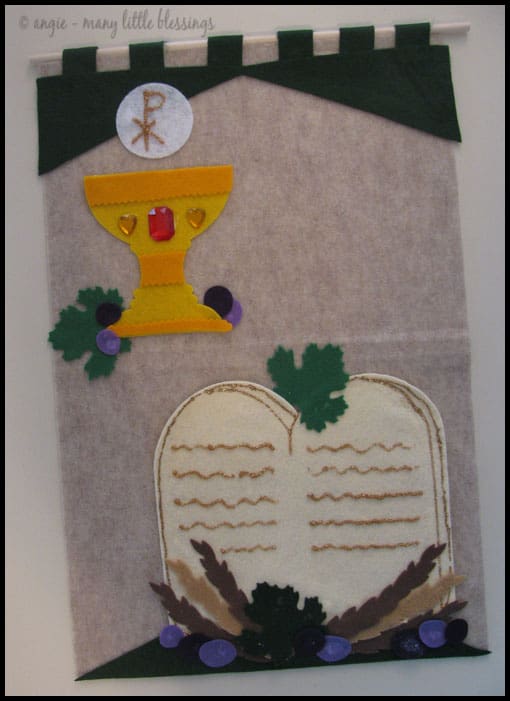 I was getting pretty close to being done here, but not quite.  I had to wait for everything to dry (that’s why the grapes all look a little funny).  After they dried, I would be able to use glitter glue to jazz it up.  I had already used glitter glue to decorate the Ten Commandments tablet.  Pretty cool, huh?  (The kit included a template so that I was easily able to make it with a more layered effect around the edges.) 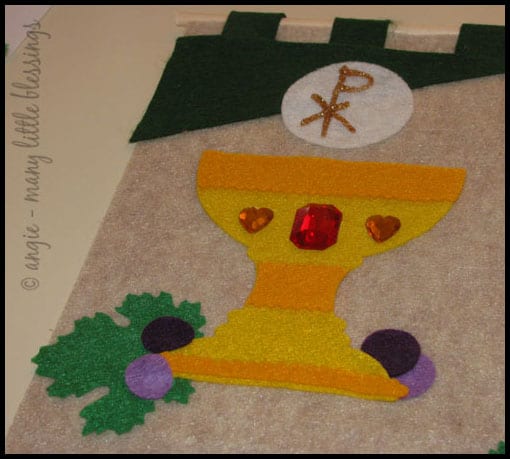 The kids loved the jewels that came to decorate the chalice.  (I did too!)

After I jazzed the leaves and grapes up with glitter (which made a huge difference), I was left with a big open spot.  This was the spot to put in someone’s name.  But, then my deliemma was that I loved the banner, but didn’t have a use for it if I put a name on it.  I realized that I could put a twist on this and have it be something we could hang in our house all of the time.

I went out in search for something else to write in my open space.  I also went out in search of the hanging ribbon that came in the kit.  I don’t know where it went, as it went missing somewhere on my kitchen counter and was never to be found again.  (My fault, not the kit’s fault.)

Finally, I was able to finish up this First Communion Banner Kit, but with my own special twist to make it a great family banner: 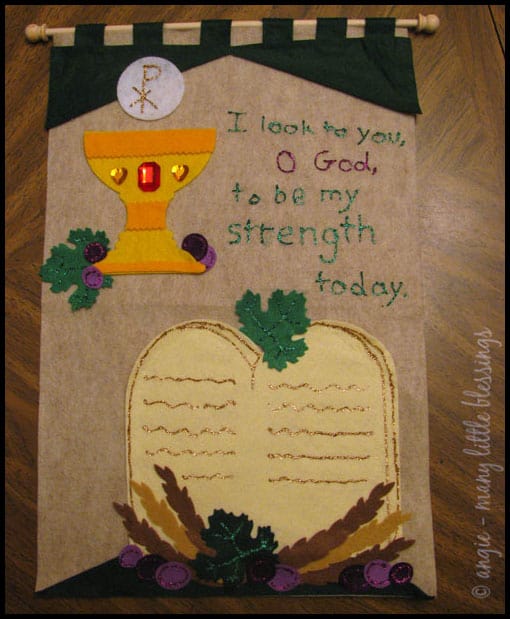 I’m afraid that this last picture just might not do it justice.  I love it.  I love it enough that I might just have to buy another First Communion Banner Kit sometime, but use it was a family banner again.  I even thought it might be great for homeschooling families (such as ours) to decorate with their homeschool name!

I really had a good time with this project, and I think you might too!

Disclosure: I received two free kits from Catholic Child Catalog for this post.  One was for me to keep and use, while the other was to be given away.  Catholic Child Catalog is also helping to sponsor my trip to Savvy Blogging Summit this year.  All opinions are my own, however, and I was not advised how or what to post in any way.

Previous Post: « Homemade First Communion Themed Cakes
Next Post: Spruce Up Your Craft Area: Recognizing When Your Space is Wrong »