You are here: Home / Projects / DIY and Projects / Refinishing a Piano: Was It Worth It? 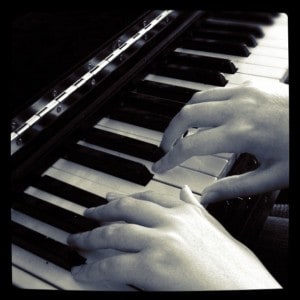 As I was listening to Noah practice “Fur Elise” today, I thought about revisiting my post from 2009 when we shared how we refinished a free piano we managed to obtain.

Well, hang on.  That’s not entirely true.  The very first thing I thought about was the 1986 McDonald’s commercial where a girl plays the piece at a recital and sings along in her head about going to McDonald’s after the recital.  I found after posting about it on my personal Facebook page that many friends my age and a bit older have forever had that song changed in their minds because of that commercial.

Anyway, back to our “free” piano…

The short story: In 2009, our boys decided they wanted to take piano lessons, and so we found ourselves looking into renting a piano from a local business, as per the suggestion of the woman we originally planned to do lessons with.  While the price was more reasonable than I suspected ($30/month), it was still a large commitment.

On a whim, I asked on FreeCycle if anyone had a piano they no longer wanted, and we were able to score one that needed some major outer work, but that worked well.  We put money into refinishing it, building a few new pieces for it, and moving it to our house.

For the long story, the cost breakdown, and all the pictures from our piano refinishing, you can read the post from 2009.

We have continued to spend money each year on having the piano tuned, but there have not been expenses other than our initial investment of $250.  This makes a total breakdown of$410 that we’ve put into our “free” piano, over the course of owning it.

So, was it worth the time, effort, and money to refinish an old, “free” piano?

Going simply on the cost factor, assuming that we would have paid for rental in August 2009 and then each month since then (figuring no increase in rental costs), we would have spent $840 thus far on rental fees.  This would have been for their cheapest piano option, which a friend said was typically a more beat up piano.  This $840 would have included yearly tunings.  That is, of course, $840 spent on something that if we stopped paying on it, it would have been taken from our home, since it was just a rental.

Now, putting aside the money issue, let’s talk about the emotional factor.  We now own our piano.  And, not only do we own the piano, but it’s the piano that Eric worked so hard to refinish, and even rebuilt two large pieces on it.  It represents a labor of love of a father for his children.  As far as I’m concerned, even if we weren’t saving money with it, that would make it worth it.

However, put them together and we’ve saved at least $430 and we have a wonderful emotional tie to the piano.  Totally worth it!

Previous Post: « C-sections Anyonymous: A safe place to tell your story
Next Post: Praising God throughout November: A Cornucopia of Thanks »