You are here: Home / Projects / DIY and Projects / Refinishing Our Free Piano
219 shares

This school year, we decided that each of the kids should take some type of lessons. It was an easy decision, because each of them had been expressing a desire to try something that involved lessons. Jack wanted to try violin, Molly wanted ballet, and Noah wanted to try the piano.

Not having so much as a keyboard, we had to seek out something to have here at home. I wrote before about our divine intervention that brought a piano that needed some real work into our home.

And here is that piano… 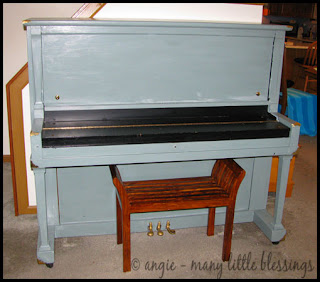 Yep, that’s right. It is an aqua color, but the last time it was painted, it hadn’t been fully painted. Several areas were still black, and then other areas were white. Even where it was totally aqua, there were lots of visible brush strokes and chipped areas. 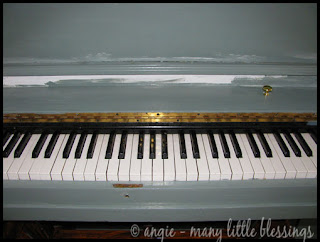 We knew right away after bringing the piano into our home that it was going to need a real makeover.

The funny thing was, we assumed the piano was originally black. We later found out that this wasn’t the case. Regardless, we had decided that the “easiest” makeover was probably going to be to return the piano to black. 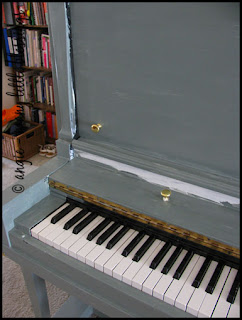 Upon working to strip the paint (with a heavy duty sander), Eric found that the piano, indeed, had not originally been black. It was first a light wood with a veneer of some kind. We found a picture online of what it probably looked like when it was first made (at least 60 years ago, based on what we found, but possibly 100 years ago).

Then, at some point, someone (who Eric said he wanted to have a serious talking to with) painted it yellow! Yes, yellow. Then, onto black. And, finally primer and aqua. 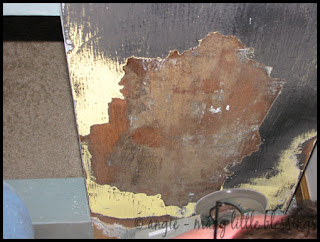 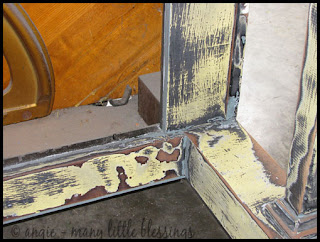 It was horrible to try to remove the paint! Poor Eric worked on it forever (or it least it seemed that way). At the very least, he definitely worked for days and days on it (a few hours at a time).

It appeared that we were one of the few people who painted it that took the time to take it all apart. Here it was taken apart and stripped as well as could be done.

Eric also, after taking it all apart, decided that a couple of parts of the piano were just too badly worn. So, he made a new piece for the top of the piano, as well as the foot board thingee. (That’s the technical term, I believe.) 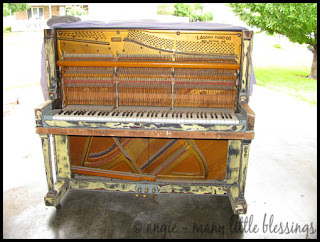 We worked on painting the piano together. We decided to drop some serious cash on the paint. We’re used to walking into Walmart to get paint, but instead, we went to Sherwin Williams. I talked to the guys there (with one piece of the piano that I brought in).

They suggested that we use a special Adhesive Primer, as the wood had gotten pretty smooth from so much sanding to strip it. They tinted it gray for us, to help us on the road to a black piano. We also picked up a high gloss black latex paint, as well as various painting items that we needed.

We used small 2-inch foam rollers (and some foam brushes for very small areas) to cover the piano with the adhesive and then two coats of the high gloss black.

And, finally, Eric put the piano back together (and replaced all of the knobs, top hinges, and long piano hinge), and we brought it back into the house… 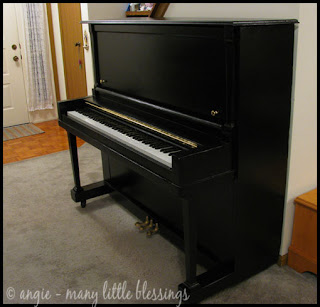 So shiny and pretty! (Of course, so shiny also meant that we kept having to take pictures of it from an angle, so that it didn’t reflect the flash right back at us.) 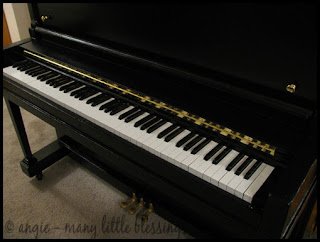 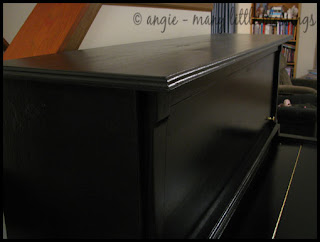 Eric used his router to make the edges of the top of the piano decorative. 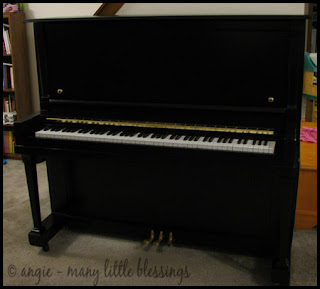 Now, of course, we need to let it settle and then get it tuned/serviced. We’re just hoping that after all of this work that it can be tuned well. We already noticed one problem key (sounds kind of flat), but otherwise, it seems to sound pretty good.

By the time all was said and done, we probably spent around $250 on our “free” piano. This included: renting a U-Haul to get it home, a $20 Pizza Hut gift card as a gift to the family that gave it to us, good quality primer and paint, painting supplies, four foot piano hinge, various pieces of hardware (hinges, knobs), wood to make the two new pieces of the piano.

But, when you consider that we were going to rent a piano for $30/month, in less than a year, we’ll come out ahead. So, while it didn’t feel cheap to do, it was a frugal option over renting.

After all this, I’m just hoping that Noah really enjoys piano lessons. If not, it looks like Molly will start taking lessons later, whether she likes it or not. (No, really — she has already asked. The piano teacher says she needs to be old enough to read first though.)

This is one task that I’m definitely glad to have done (and Eric is too!). But, there is also definitely a sense of pride as we walk by the piano at a job well done.

This post is linked to Tackle It Tuesday and Frugal Fridays.