Getting prepared for a first apartment has been on my mind a lot over the past year. In particular, I’ve been thinking about essentials someone would need for their first home.

Last May, my son moved out at the age of 21. He moved in with a friend who already had a house. Logan packed all his stuff in boxes and drove from Ohio to Texas toward his first taste of independence. Because his friend already lived in the house, Logan didn’t need any furniture.

A few months later, Logan’s friend got engaged and was set to marry after the first of the year. Now, Logan was on the hunt for an apartment. Aside from the financial aspect of signing a lease and a rental agreement, I was worried that he’d now have to furnish a place of his own. 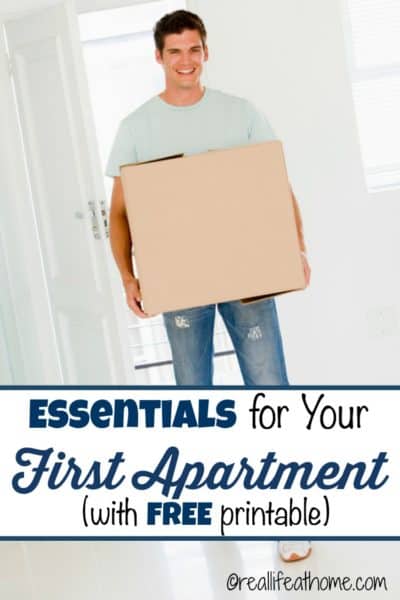 Essentials for Your First Apartment

Logan did find an apartment and moved in on his 22nd birthday. His friend actually let Logan take the furniture that was in his bedroom since he and his new bride were going to furnish their house with new stuff. So, Logan moved in with his clothes, a small TV, a bed, and a dresser. That’s it! He immediately went out and bought what he thought were essentials – a shower curtain and a kitchen trash can.

Shortly after Christmas, my daughter and I flew to Texas to visit him and see his new place. We were so excited! His new place is a super cute little apartment. But, I quickly realized that he really had no idea what was really essential.

Not long after we arrived, we made a trip to Target for a couple of basics. He had an air mattress, but no sheets, blankets, or pillows for us to use. He had towels, but he only had two. So, I bought him two more pillows, two fleece blankets, two more towels, and some laundry soap on that trip to Target.

What he had to start with was perfect for just him. But, it wasn’t going to cut it if he had visitors. Throughout our stay, I was inspired to come home and create a list of things that I consider essentials for setting up a house. Whether it’s a house or an apartment, the basics are still the same.

If you know someone moving into their first place, you’ll want to print out this list to share with them. I guarantee there will be things on the list that they hadn’t thought of. Click on the image below to download your free Essentials for Your First Apartment Checklist. 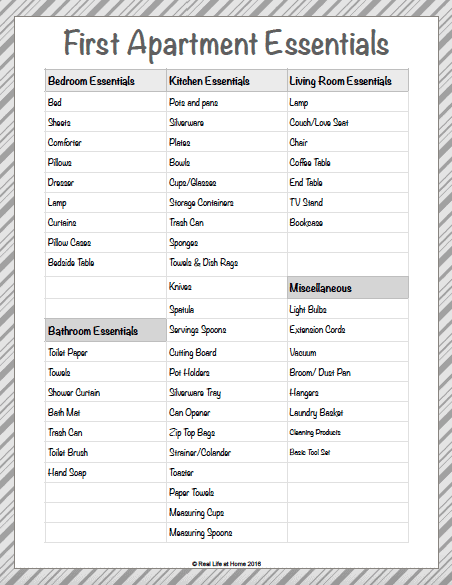 Please note, I didn’t include things I consider ‘wants.’ I didn’t add items like a television, coffeemaker, microwave, etc. You don’t have to have these items to live comfortably.

Of course, there may be items on this list that you also feel are wants and not needs, but I thought they were great essentials for a first home.

Are there any essentials for a first home that you would add to this list? 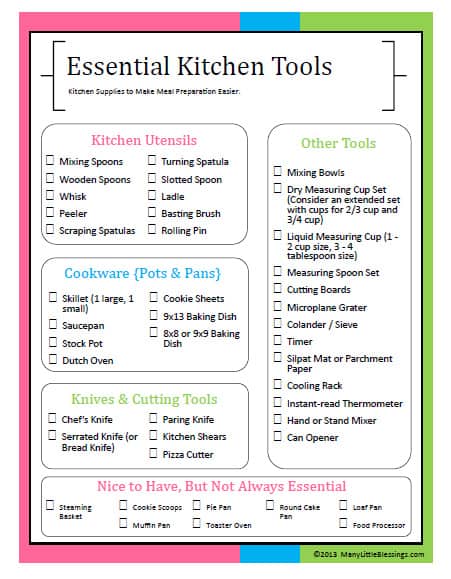 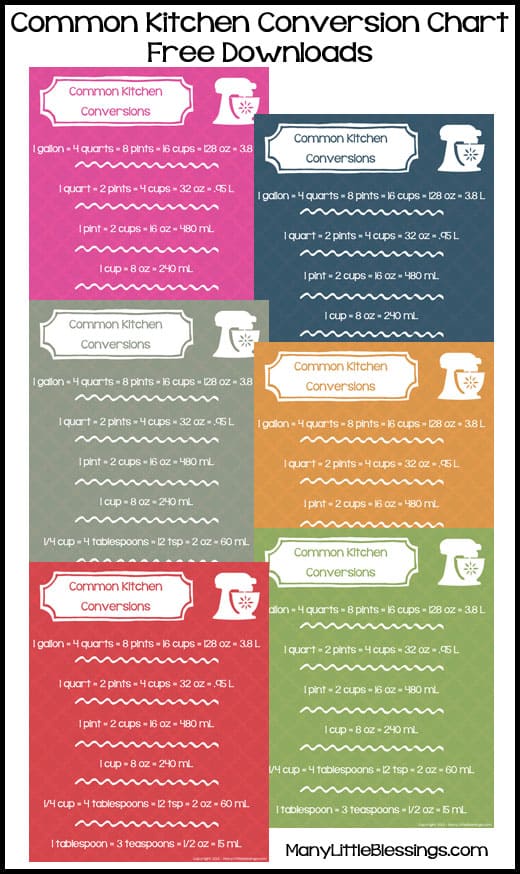 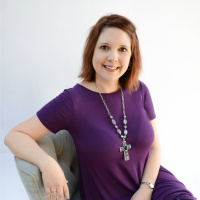 Tara is a homeschool momma of three. Her children are 21, 16, and 11 – two boys and one girl. She is currently homeschooling her daughter – 6th grade. When she’s not blogging, Tara enjoys crocheting and snuggling up with a good book. She and her family recently moved from Texas to Ohio, and they’re having fun exploring their new surroundings. She blogs about homeschooling, motherhood, and family life on both of her blogs – This Sweet Life and Embark on the Journey