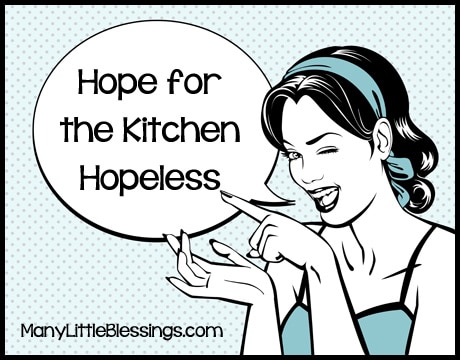 I have shared in the past that I am pretty domestically challenged.  While I feel like I get a little better every year, it’s still a far cry from where I want to be – both for my benefit and for my family’s benefit.  One of those areas that is especially bothersome is in the kitchen.  A little dust seems livable.  Being hopeless in the kitchen becomes an issue for not only my family’s palate, but their health as well.

It’s because of my goals to become more adept at all things domestic, but especially in the kitchen, that I have started this feature of Hope for the Kitchen Hopeless.  While it will be going on for the next ten days as 10 Days of Hope for the Kitchen (as part of iHomeschool Network’s Fall Hopscotch), this will be an ongoing feature here on Many Little Blessings.

So, if you are new here and enjoy this series, I hope that you’ll stick around by becoming a reader by email (full posts each time a new one is published or weekly with a short summary) or by a feed reader.

I’m not promising that you’re going to go from Kitchen Zero to Kitchen Hero by reading these posts during the series and beyond.  But, I do hope that if you feel like you’re a Kitchen Hopeless, you might pick up some tips that might make you just a little more comfortable in the kitchen.

I promise – it really is possible!  When I got married at 19, I could barely make anything.  Just a couple of years before that, I had managed to burn Rice Krispie treats while making them.  Oh, and did I mention that it happened not once, but three times?  While I would like to say that those three times means that I burnt Rice Krispie Treats three different times I tried to make them, what it actually means is that I burnt them three times on the same batch.

My friends, that takes a certainly level of kitchen hopeless.

And so, just a couple of years after that, I was off on my own with Eric!  That’s kind of scary now that I think of it.  It also makes me remember how much macaroni and cheese with tuna we must have eaten.

I’m still no master chef.  I’m not even close.  As a matter of fact, I’m still pretty darn kitchen hopeless myself.  But, I’ve learned some things along the way that have helped.

When I was recently telling a friend about the series that I was writing about and told her it was Hope for the Kitchen Hopeless, and that I was definitely kitchen challenged, she scoffed.  “You?” she asked.  “Really?  I would never think that.”

Now, keep in mind, this isn’t a friend that I know mostly through online channels.  This is a local friend whom I have eaten many meals with, several of which I have prepared.  She has also attended several parties where I have often had a spread of food on my counter tops.  This is the kind of friend that, if she had no idea how lacking I am in kitchen skills, then it means that I am doing something right in either learning more or in faking it. 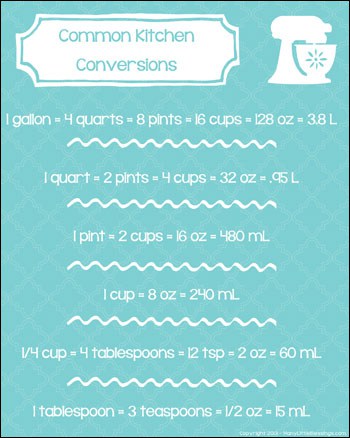 I hope that you’ll continue to follow along in this 10 day series, as well as when this feature pops up from time to time here on Many Little Blessings.  As a special kick off to the series (and blog category), I have a free common kitchen conversions chart (in multiple colors), which is officially the list portion of my post for List it Tuesday this week (the link up is below).  It can help you when you’re following recipes and are left with a “hang on, what does that equal?” but it also doubles as art for your kitchen.  Bonus!

And now, here is the List it Tuesday link up (if you read by feed reader or email, you’ll need to click through to see the links or to link up)

Previous Post: « Number Writing and Matching Game for Preschoolers
Next Post: Eight Tips for How to Menu Plan »