You are here: Home / Homeschool / Why Eclectic Homeschooling Works for My Son with Autism
146 shares 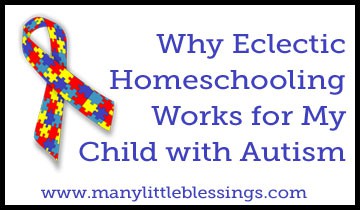 Today, I thought I would look at the reasons that being an eclectic homeschooler works for not just my children, in general, but for a child with Autism.  (My son with Autism will be 13 years old next month and will be starting 7th grade next school year.)

Why Eclectic Homeschooling Works for My Son with Autism

1. We don’t feel the pull to use a particular curriculum company.  I am usually jealous of the idea that some people use a curriculum where they don’t have to plan as much as I do.  They get their guidebooks and follow along, adding and subtracting as needed.  However, from the couple of times when I have followed a plan like that (or just tested it out), I realized that it works best for us if I come up with our own whack-a-doo schedule, rather than feeling tied to a set one.

2. I make the schedule.  Not that people with a set style can’t make their own schedule, but I also am not attached to a certain curriculum brand with a structured guidebook.  While I know you still don’t have to do everything in those guidebooks, I always feel like a cheater if I don’t.  I can make our schedule to best fit Noah’s needs.

3.  We can switch (many times, if needed) what program we’re using in a subject. Noah really loves history and science.  These are also the subjects that we have switched up the most since we’ve been homeschooling.  Being eclectic has allowed me to try different programs until we found what was just right for us.

Noah really loved Story of the World, which we started part of the way through last school year.  He was quick to tell me (and tell me many times) how much he liked it and wanted to keep using it.  (I think he was afraid I would change it again!)

4. Ability to emphasize some subjects.  I can decide to spend more time on subjects of great interest in order to encourage a love of learning.  While this is doable with a set curriculum guide, it can be difficult to keep moving through the guide when more time is spent in one area.

5. Ability to minimize some subjects.  We don’t skip any subjects, but there are definitely some that we don’t put as much emphasis on as others.  While Noah doesn’t care for art, we still do it more than he would want because of his siblings.  However, if he was an only child, I would feel comfortable touching on it only a bit each school year and then stopping it totally after sixth grade or so.

Factoid: Though I now have an Etsy shop for my art (as well as go to craft shows and the like), after sixth grade, I never again took an art class in public school.  (I did, however, have to take a semester of teaching art as an elementary education major in college.)

6. Students can help make the curriculum.  I can ask the kids what they think of certain elements of our curriculum, and if I think it’s appropriate, I can add, replace, or take away based on their requests.

Does that mean that if they say they don’t like a subject that I’ll get rid of it?

No, of course not.  But, if they all dislike a certain subject, it makes me look at the resource we’ve picked for it and re-evaluate.

7.  Things are not too rigid.  While it seems like it would be a benefit to have a rigid schedule with a child with Autism, it’s not for us.  What a lot of kids with Autism want is a predictable schedule, not necessarily rigid (though some need that).

For Noah, he wants to know what to expect, which is why I do assignment sheets (though I’m switching to assignment books for next school year for all of the kids).  He also seems to like us to have some flexibility.

8. We can skip activities that might be stressful, without feeling like we are missing part of a curriculum.  If I come across an activity that would be overwhelming in its sensory aspects, I just know that it would not necessarily be something to add to our plans.  If I was using a set curriculum, it is possible that that activity would be a building block to other activities and difficult to skip.

9. It’s typically less expensive.  We’re on a limited budget.  Spending less on our curriculum (even though we spend more than many other eclectic homeschoolers I know) means that we have money for lessons that we might not have if we had to sink $800+ into one level of a set curriculum through a company.

I think it’s great for the kids to be able to take classes and lessons.  In Noah’s case, this means piano lessons.  (Where his very unique mind doesn’t allow him to remember the names of any of the notes, but instead, he just sees the notes and knows which keys to play.)

Other families might need extra money for therapies for children with Autism.  For us, we opted to stop therapies last year.  He had been receiving multiple therapies weekly from the age of two.  After 10 years, everyone agreed that he had likely made all the progress he would make and it was okay for us to take a break from therapies.

10. His Mom just likes it better like that.  And, aren’t kids happier when their teacher Mom is happier?  Or, at least that’s the case at our house!

***Hey – can I get you guys to do a quick, 1 minute (or less) favor for me?  My blog is nominated on the Circle of Moms Top 25 Best Homeschooling Moms.  I would love it if I could stay in the Top 25, but it’s going to take votes.  The best part, though, is that you don’t have to register to vote or anything like that.  Just pop over to vote for Many Little Blessings on Circle of Moms, click the like/thumbs up button and you’re done.  (Well, except you actually can vote once every 24 hours, if you’re so inclined.)   Thanks so much!

Not only is this post this week’s Top Ten Tuesday, but it’s also part of iHomeschool Network’s 10 in 10 (a ten week series).

Previous Post: « How to Teach Your Children Home Ec Skills
Next Post: 10 Reasons For Our Relaxed Eclectic Homeschool Method »