You are here: Home / Family Life / Disney / The One Where We Get Away from the Snow and Go to Disney World
30 shares

This post was supposed to be last week’s List it Tuesday.  But, do you know what?  I was just way too exhausted from getting home from our trip to Disney World to even think about trying to process some pictures and get them ready to post.

16 Things We Did on Our Disney World Trip 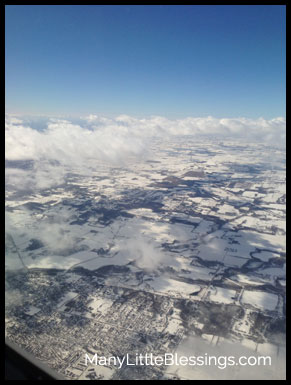 We hopped on a plane and left the snowy Midwest behind. 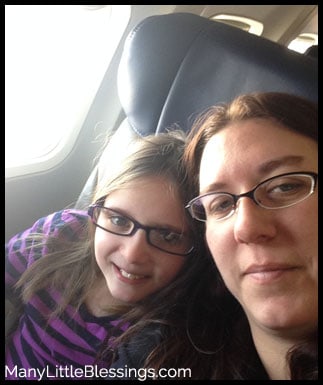 I got to sit on the plane by my favorite girl.  She let me squeeze her leg when I got nervous.  She’s a pal like that. 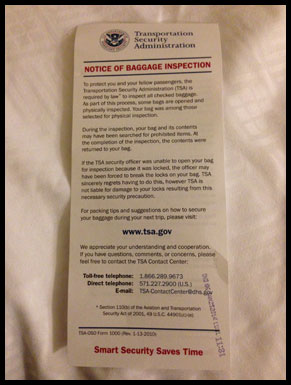 Disney briefly lost one of our pieces of luggage.  We used their service where they’ll pick up your luggage for you and then deliver it right to your room.  When we were short one bag, we had to call luggage service at our resort.  They showed themselves as delivering the correct number, so they said that probably meant they dropped off one of our suitcases in the wrong room.  Yikes!

About 30 – 40 minutes later, they showed up at our room with our suitcase.  Said suitcase also had a note in it that it had been opened and inspected by TSA.  Know what?  The exact same bag had the exact same note in it when we got home.  Yep, it was inspected yet again on the way home. 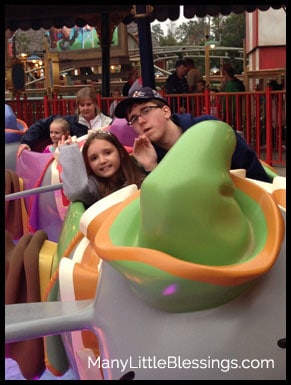 Although we sought out some of the more exciting rides, Dumbo was surprisingly fun, as always. 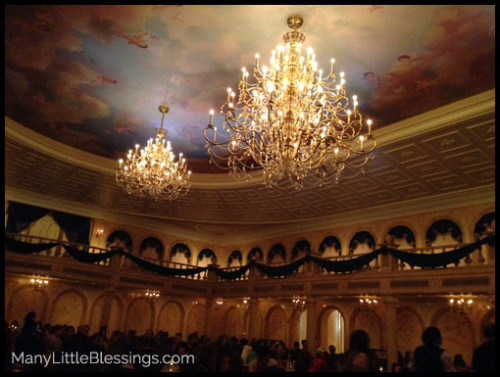 We scored dinner reservations at the popular New Fantasyland restaurant Be Our Guest.  I tried to get a reservation from the time we booked our vacation with no luck.  It was only the week before that I managed to get some very late dinner reservations.  And, then while we were actually there, I scored a regular dinner time reservation.  We loved it! 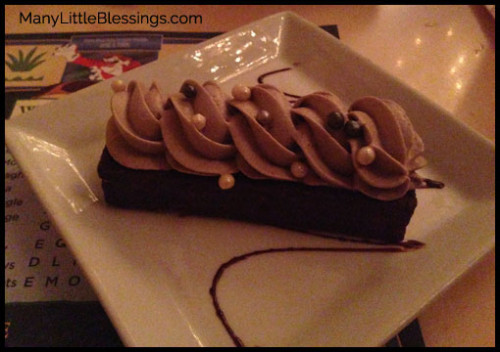 The song doesn’t lie and nor do the dishes – the grey stuff IS delicious!  Not to be contrary though, but we would probably recommend the cupcakes over the grey stuff though.  The strawberry cream cheese cupcake was heavenly.  We actually each ordered our own desserts and then a grey stuff to share.  (Yes, this really is called “the grey stuff.”) 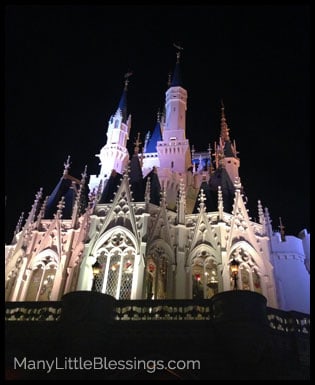 We ate at this pretty magical place too.  This time we ate dinner at Cinderella Castle, and last time we ate breakfast.  We have all decided that we preferred dinner.

(We had a discounted regular dining plan.  That’s how we managed to go to so many character and other special sit down meals.) 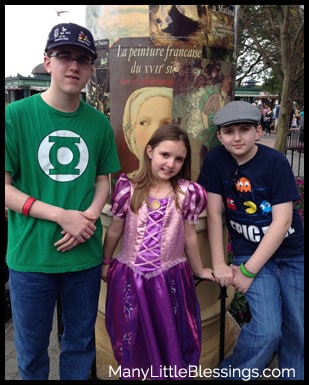 Ooh la la!  We visited France.  Not only did I get a box of macarons each time, but the boys also worked on their French skills by ordering their own things in French. 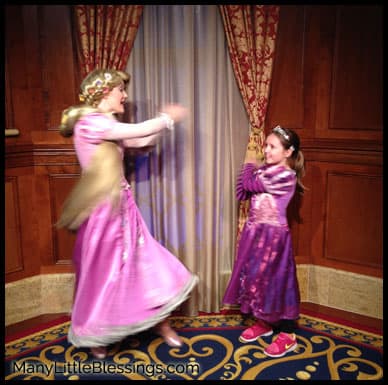 Our little Rapunzel met a bigger Rapunzel.  Rapunzel called Molly her twin and asked if Molly had been shopping from her closet.  She then taught her the correct procedure for swinging a frying pan. 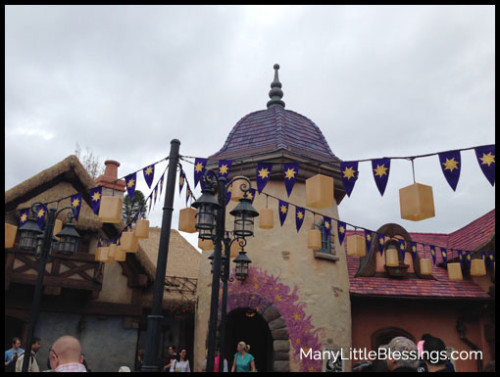 We were excited to see a new addition to the park from our last visit.  Rapunzel’s tower (which they were just putting in when we were there last) now towered over Rapunzel’s kingdom.  Of course, it would be more exciting if this area was more than just seating and bathrooms.  But, it’s especially beautiful at night when all those lights are flickering and look like floating lanterns.  It made my Tangled-loving heart sing. 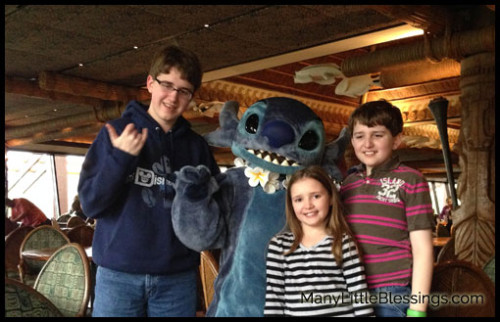 Hang out with one of Noah’s favorites – the one and only Experiment #626 – Stitch. 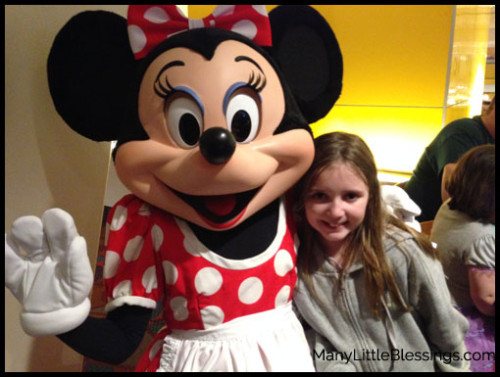 Molly always insists on a picture of just her and Minnie.  Interesting factoid: Minnie was actually on our name list when we were expecting Molly.  Not for Minnie Mouse though.  (Other names on the list included things like Tuesday, Poppy, and Scout.) 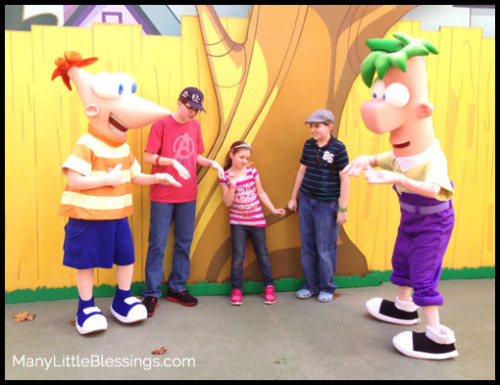 Dance party with Phineas and Ferb!  Those guys were pretty hilarious. 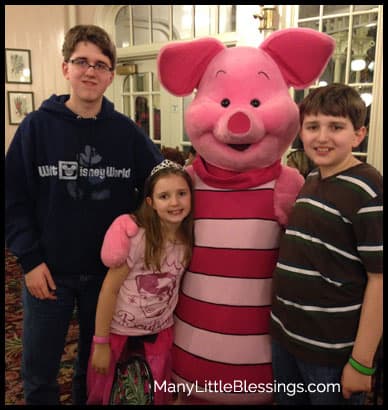 Piglet is just as sweet and cute in person as you would imagine.  I think that Disney picks some very special people to be in the Piglet character because he’s always just perfect. 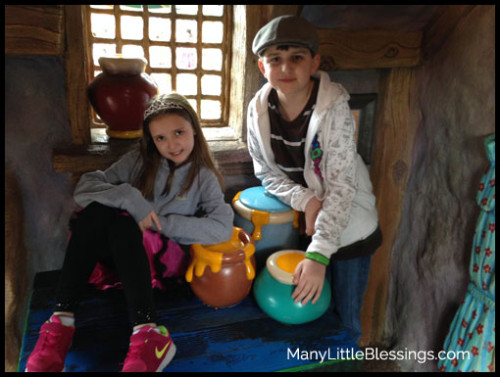 Oh, you know, just chillin’ in Pooh’s house, that’s all. 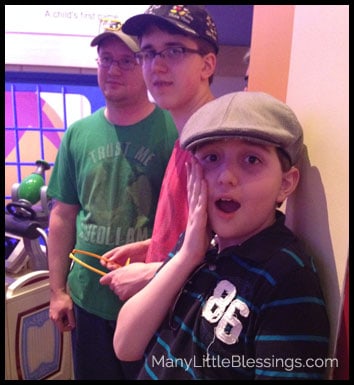 Jack’s reaction (okay, maybe it was staged) after we had to be rescued from the Toy Story Mania ride.  It went down right after we finished on the ride but before we actually got out.  They had to manually release the harnesses on each of the cars so we could get out.  Then we had to hang out in one spot while they freed other people too.

They were very nice and gave us FastPasses to go on the ride again sometime in the next few days.  We were going back in that time frame, so we split our five passes between two different families a couple of days later who were waiting for the bus to Hollywood Studios.

We had lots of other adventures too, but this, I suppose, is about as long as I should share.  We had a wonderful time, just like we have for the prior two years.  We figure this was our last trip for a few years though.  So, we made sure to ride some of our favorites over and over.  I think we even beat last year’s record of seven times on Big Thunder Mountain.  And, Molly and I can now say that we rode the Tower of Terror four times (the guys all just did it twice).

Of course, now this means that we probably need to come up with a considerably less expensive vacation for next year.  Road trip, anyone?