You are here: Home / Family Life / Marriage / 7 Things We’ve Done to Have a Successful Marriage for the Past 18 Years
375 shares

As I sometimes like to do when our anniversary nears, I decided that I wanted to write about marriage.  As hard as it is to believe, in less than a week, Eric and I will celebrate our 18th wedding anniversary.  Of course, that may not seem hard to believe for those of you who don’t know us personally.  But, when someone finds out that I’m 37 and will be celebrating an 18th wedding anniversary, they are sometimes surprised.

Hey – Don’t worry, Eric – this isn’t like the time where I wrote “The Anniversary Post Where I Focus on the Bad Times.”  But, in the end, that was a pretty okay post, wasn’t it?  But, it also isn’t 10 reasons that I love you or 10 reasons that you love me.  Thanks, however, for writing that post.  That was pretty sweet. 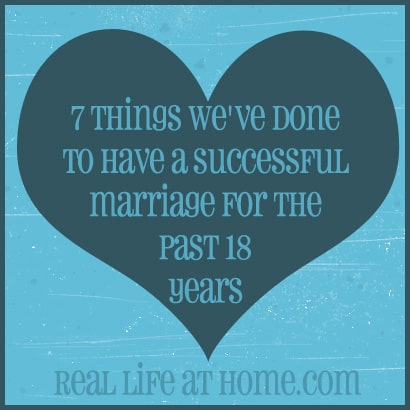 1. We say please and thank you often.

I wanted to say we were always polite, but that’s not true, of course.  We do, however, say an awful lot of please and thank you to each other.  Not only is that a nice way to show appreciation for each other’s time and efforts, but our kids said lots of please and thank you from when they were very small.  I don’t remember teaching them that, so I suspect it came from listening to their parents.

2. God is part of our marriage.

I once heard on a show on EWTN that every marriage was really between three people – the two spouse and God.  I’ll be honest – there are times during our married life where we have let God in more and times when we have let Him in less.  A lot of the hardest times in our marriage have been those times where we weren’t as close to God and we weren’t taking the time to pray for each other.  In our marriage, we need God.

Sometimes I wonder if the divorce rate is so high because people are just too quick to throw in the towel and walk away from marriage.  This isn’t the case in every divorce, of course.  Please don’t think that I’m saying that.  I have known people in destructive and abusive marriages.  I’m not talking about that.  I’m talking about the people who just think marriage isn’t fun anymore or who get in a few arguments and then they just walk away from it.  Marriage isn’t always easy, but it’s worth the work.

We once had a particularly difficult year.  It was so long ago that I don’t even remember it very well.  I do remember living together and feeling like we were more like roommates.  I remember thinking it was weird and things weren’t right.  But I don’t remember either of us ever suggesting divorce or even separation.  I guess we both just assumed it would eventually get better.  Neither of us remember how or when it got better, but it just did.  Weird, I know.  But, I’m glad we stuck it out.

4. We support each other.

Yeah, sure – I sometimes give a long sigh with an eye roll and my head cocked to one side at some things that Eric does or says.  He sometimes takes a deep breath and closes his eyes with a slight head shake at things I do or say.  But do you know what?  We are each other’s biggest supporters.  We encourage each other.  We celebrate successes.  We try to problem solve through issues with the other person.  We lift each other up in disappointments.

Life is tough.  Life can be stressful and difficult.  It becomes a lot easier, however, when you know that you have your very own cheerleader, therapist, fan, and friend all wrapped up in one person.

I’m going to be as delicate with this one as I can.  I didn’t actually want to add it because we have friends and family that read my blog.  However, it’s something that has made such a big difference in the last six years that I can’t skip it.

Let’s just say that before this big change, it wasn’t uncommon for me to try to slide into bed as quietly as possible and then pretend to be asleep if Eric happened to wake up and want to spend some intimate time together.  I had any number of avoidance methods, actually.  Because of this, he had a habit of pestering me in the middle of the night.  He also would sometimes bug me about it during the day and let me know how long it had been since the last time we had been intimate.  He would feel rejected and I would feel annoyed.  That wasn’t particularly helpful for either of us.

Then the big change happened.  I told my priest about my avoidance behaviors while I was in confession once.  I don’t even know what made me tell him.  But, his response was exactly what I needed to hear.  He asked why I was lying to Eric.  He asked why I didn’t just start being honest with him about it instead.  He suggested that instead of pretending to be asleep, for instance, that I just be honest and say, “I love you, but I’m just not interested in doing that right now.  But, I promise we will sometime soon.”  Then, I would actually need to follow through on that sometime.

A funny thing happened.  When I was honest, Eric didn’t feel rejected.  He also realized he had been pestering, so he stopped.  When I didn’t feel pestered, it suddenly didn’t feel like an annoyance or obligation.  It seemed like something I could be interested in.  We could both feel better and more comfortable with each other once we both just started being more understanding and honest.  It was a really wonderful change in our marriage.

6. We laugh together a lot.

We crack each other up throughout the day.  It’s one of my favorite things about our relationship.  In fact, just thinking about that made me get a big smile across my face.

7. We’ve made family a priority.

This isn’t to say that our priorities don’t get messed up sometimes.  But, we have tried to make family a priority.  Not just our family here at home, but extended family as well.  While Eric is not close with his family, he has really made my family his own family.  That was something that meant a lot to me, because my family is extremely important to me.

These are just a few of the things that I think have helped us to have a successful marriage so far.  Now, I’d love to hear yours!  What are some of your best marriage tips?  Share them in the comments section.