You are here: Home / Family Life / Homemaking / Saying Yes to Cooking Help (Even When I Don't Want To)
10 shares

I have mentioned many times before about my lack of cooking experience growing up. I did do some baking (even pretty young), but always things like cookies.  (And even then, it was only peanut butter cookies and chocolate chip cookies.)  As a parent, I have a better understanding of one of the reasons I probably didn’t help with cooking and baking growing up — it’s just more work for the parent typically.  It’s usually easier and quicker to say no when little hands want to help.

Again, I have mentioned my realization in the last year or so that I need to start working on the basics with my kids of some of those skills that I never learned growing up.  This is easier in theory than in practice, of course.  However, I have been trying to tell myself a few things.  Among those things are facts like: (1) The children won’t learn to do these things if I don’t teach them.  (2) If I take the time to teach the kids homemaking skills now, they will be more help to me while they’re still in the house.

Last week, I grabbed everything out to make cinnamon chip scones and Molly quickly came running into the kitchen.  “Can I help?” she said with all of her six year old excitement.

“Not right now,” I answered.  “I just want to whip these up quickly.” 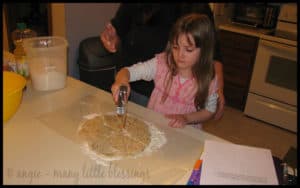 She walked away, disappointed.  Then, she came back to visit, but didn’t ask to help again.  I felt bad and realized that this was exactly what I had been trying not to do.  I grabbed out the rolling pin and asked if she wanted to roll it out.  Her big brown eyes got extra big and she almost had to stop her hands from clapping, “Oh yes!” she exclaimed.

I helped her some, but tried to be as hands off as possible.  Then, I got out the pizza cutter and offered that she could also cut the wedges.  This was difficult for me because she did not cut them perfectly.  I gave her a little guidance but, again, tried to tell myself that she needed to do this herself.

Sure, the scones were not the exact thickness that I might normally do.  They weren’t cut perfectly either.  But, it was the journey that was important, not the destination. Although, let me just tell you, when the journey is lined with cinnamon chips, the destination is probably going to be pretty tasty.

What ways do you let you children help in the kitchen?

This post is linked to Works for Me Wednesday and Finer Things Friday.