You are here: Home / Language Arts / Foreign Language / Resources for Studying French in Your Homeschool
596 shares

I have shared a couple of times lately that we finally settled on a foreign language to study in our homeschool, and it’s French.  The only problem with deciding on a language like French is that there aren’t as many curriculum choices as there are for things like Spanish or Latin.

A couple of years ago, before we really cemented our language choice, we worked our way through the Hooked on French program from Hooked on Phonics (which they don’t sell anymore).  Beyond that, however, I had a hard time finding something that would bridge us through to keep working on French until we hit more of a high school level.

So, in what has turned out to be my homeschool style, I just grabbed a lot of resources and decided to have us work for 15 – 2o minutes a day on three days a week.  I also purchased enough items that it will actually carry us beyond this school year, which will be nice to not have to come up with more resources again so soon. 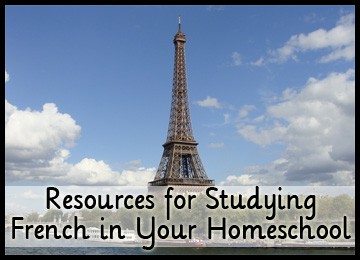 Materials and Resources For Studying French in a Homeschool

2. A program with audio, written, and computer lessons: French in 10 Minutes a Day (book and audio CDs)

3. A French workbook with reproducible pages: 100+ Reproducible Activities in French.  Although, I’ll add that I thought these were available for cheap enough that I bought one for each of the kids, rather than needing to make so many copies.

5. An activity book with lessons in it as well: The Everything Kids’ Learning French Book

6. A book with an audio CD that includes games, songs, and activities: Play and Learn in French

Other things we’re not currently using, but may use…

10. Apps: If you have a device that can use apps (such as an iPad), then you can probably find a variety of apps that will have some language learning activities.  Some examples: French Words for Kids HD, Princesses Learn French, French Free 24/7 Language Learning.

If you want more ideas for teaching any foreign language at home, you can check out a post that I wrote about Foreign Language Activities for Homeschool at The Happy Housewife.

What types of resources have you used to teach (or learn) a foreign language?