Although I last made these before Christmas, with Autumn starting today, it seemed perfect to post about cake donuts.  This recipe is one that my Mom used when we were growing up.

Before I post this recipe, please know this is from an old cookbook.  These are not low cal donuts.  Hang on, are there low cal donuts?  If so, please let me know!

To start, you’ll mix up your dough.

2. Beat in 1 cup of sugar and 2 tablespoons soft shortening.

4. Add the following ingredients together (before putting them into the mixture):

4. Stir in the #3 ingredients into your egg, sugar, shortening, buttermilk mix.


Okay, so now you have the dough, let’s get started on making the donuts.


Flour the kitchen surface of your choice.  They say a cloth, I did wax paper.  Either way — flour it.

Roll out the dough to about 1/3″ thick.  Then cut out the donuts with a donut cutter that has been floured. 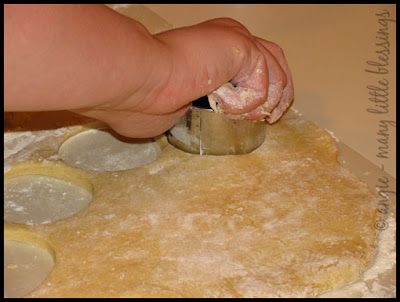 While you’re cutting your dough, make sure to start heating oil for frying.  It should be about 370 – 380 degrees when you are actually frying the donuts.  This is much more easily done in something where you can set the heat.  We ruined one thermometer (the one in the picture) and then had a difficult time with another.  This is because we were having a hard time controlling the heat.

Next time I make these, I will definitely be using something where I can set the heat.  But, that’s just because I enjoyed the hole whole process of making it, but got a big headache with the actual frying because I worried so much about the heat. 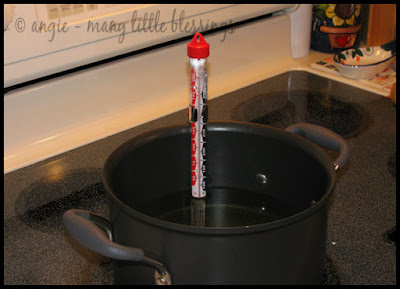 Using a special donut cutter, you can make donuts and donut holes at the same time.  Personally, we liked the donut holes best.  I don’t know why — we just did.

Me admitting this apparently shocked the donuts. 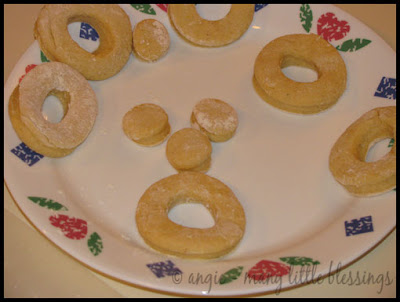 Once the oil has reached the correct temperature, start setting the donuts into the oil using a spatula or something that allows you to place the donuts in and not worry about being splattered by hot oil.  Or, you know, to get drops of it on a black shirt that you really like, like I did.

Only put in as many donuts as you can easily get in to flip the donuts.

Turn the donuts as they rise to the surface and start to brown a bit.  You’re going to fry them for about 3 minutes to brown them completely on both sides.  This is why oil temperature is important.  If it is too hot, the donuts will brown before they properly cook inside.  If it is too cool, they’ll take longer to fry and soak up too much oil.

When the donuts are done, take them out of the oil and place on a plate with paper towel (or the like) to soak up excess oil. 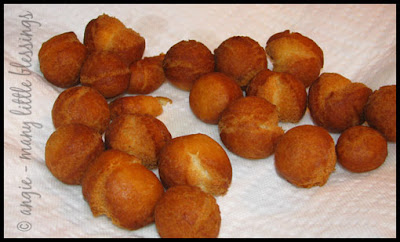 Donuts can be eaten plain or covered in sugar, cinnamon sugar, powdered sugar, or some type of glaze.
We went with sugar.  So, we just put some hot donuts in a brown paper bag and shook them around in the sugar. 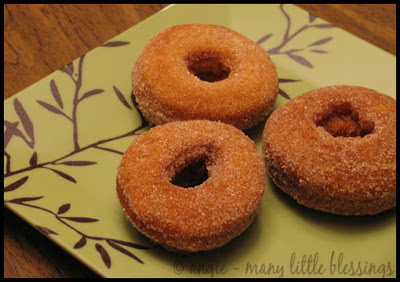 The recipe says this makes 24 donuts that are 3″ in size.  Ours were slightly smaller, so they made even more.  When I make them again, it will definitely be before some kind of event or to send in to Eric’s work, because there were just so many. 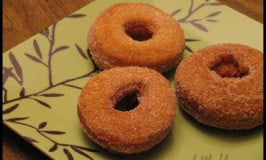 After dough has been chilled.

After your oil is hot enough for frying the donuts

This recipe makes around 24 donuts that are 3-inch size donuts.
Tried this recipe?Let us know how it was!