You are here: Home / Memories / Our Best Recent Homeschooling Moment 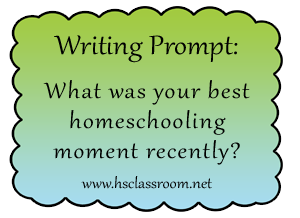 My writing on this prompt has had to go up late this week.  We’ve had such a crazy week that has included things like calling 911, buying a new refrigerator, and many other adventures that I would have rather avoided.  But, life’s just like that sometimes.

Due to this crazy week, I was prepared to say that I thought my best recent moment was just that in all of the craziness, homeschooling allowed us the flexibility that we needed.  However, then another thing happened that made me have to go with it instead.

You see, our oldest son has Asperger’s Syndrome (a high functioning form of Autism).  He also, in all likelihood, has ADHD.  With this two things coupled together, you can probably imagine that unless a topic is his obsession du jour, he can often not be able to spout back any facts to me about things we are studying or have studied in the past.

While we are not homeschooling primarily for religious reasons, I still often get frustrated when he can’t answer some of the questions we talk about during our religious studies.  I worry that I’m not training him up in the way that I, perhaps, should be.

Last night, however, as a family we went to a reconciliation service and I was reminded that I need to not worry quite so much.  (For those unfamiliar with that, it is a service for Catholics that is not a full Mass, but rather a time for some songs, prayers, readings, a homily, reflection, and then individuals get in line to go to reconciliation – aka confession.)

After Noah (our eldest) had gone to confession, he came to pray his penance.  Afterward, he looked at me and said, “Can I tell you what I prayed to God about?”

And, then I can’t exactly give you word per word what he said, because I was surprised and it was long.  (It seemed inappropriate to ask if I could write it down, though I really wanted to.)  What he told me was that he prayed that God would lead him away from sin and put him on a path toward Him.  He said he asked to be on a path toward kindness, charity, and wisdom.  He added that he asked God to give him wisdom to know how to live in the right way and how to help others.

I had to throw my arms around him and kiss on him.  (Twelve year old boys love that, right?)

It was a reminder that even if he doesn’t have some of that Biblical and Church book knowledge that I want him to have, and even if he still needs us to help him pray whatever prayers he received as penance (otherwise, he’ll forget the prayers as he goes along when he does them himself), he gets the bigger picture.  Somewhere in the things we are teaching and the way we are living, he is learning it in his own way.  Most importantly, it’s a way that is truly in his heart.

So, what has been one of your best homeschooling moments recently?

Angie is a homeschooling mom to three children and writes about the adventures of her life as a domestically challenged nerd-type turned stay at home Mom at Many Little Blessings. She is also the founder of The Homeschool Classroom, Catholic Mothers Online, Tiny Owl Designs, and Just a Tiny Owl {Etsy shop}.