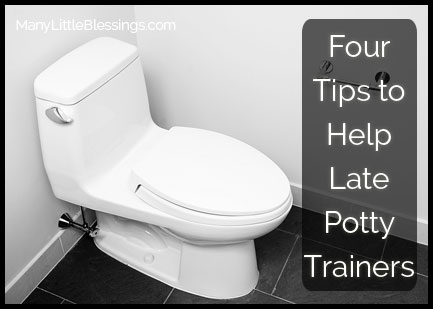 With children ages nine through fourteen, we are (thankfully) far removed from potty training days.  There were days, however, when I thought I might never be done with diapers.  I’m sure that most parents have that feeling, but when you have a late potty trainer, it can feel even more like that.

While Molly was potty trained at a more typical age, her brothers (one with Autism and another that had developmental delays) were both late to being toilet trained.  In fact, though two years separate their ages, they were both finally potty trained at 4 years 10 months old.

Yep, that’s right.  Both of my sons were nearly five years old before they were out of diapers.  Not only does that mean we spent a fortune on diapers, but it means that at one point, I was very pregnant with my third child and still had two in diapers that could have, theoretically, been out of diapers.  I was very worried that I would end up with a five year old, a three year old, and a newborn all in diapers at once.  Thankfully, Noah pulled through for us and left the diapers behind just a few months before Molly was born.

A caveat: For whatever lucky reason, both of our sons were dry throughout the night for a couple of years before they were successfully using the bathroom during the day.  So, I don’t have any good advice about night training.  Sorry!

This was suggested to me by a child psychologist that I was talking to about an unrelated issue.  He suggested that we buy a toy that our child would really, really want to play with, but to have it available to the child only while he was sitting on the toilet.

Yeah, I know.  This sounds both unsanitary and like it really limits the type of toy that it is.  But, by the time we tried it, we had already tried a variety of things.  We picked a toy that could be cleaned and that was small.

This one didn’t work for us at all, but I’m sure it might work out for the right kid.

This can take on whatever appearance you are comfortable with and that you think would work well for your child.

When we first tried this with Noah (who has Asperger’s Syndrome, a high functioning form of Autism), I had a small crate with inexpensive toys and offered that he could pick one, if he successfully used the bathroom.  This was a dismal failure.  He wanted the toys, but just couldn’t make himself do it.  So, I suppose in a way, this wasn’t a failure because it was through this that I realized that he just wasn’t able to do it at that point.  No reward would be great enough to make it happen.  There was no point in making either of us miserable.

Rewards did, however, help Jack make progress.  They weren’t what cinched it, but they helped.  His rewards were just M&Ms.  He got one for trying, and three for success.  (I think, if I’m remembering correctly.)

That sounds all Pavlovian, doesn’t it?  In my defense, I was in graduate school working on my masters in special education while we were working with Jack on potty training.  So, it was certainly the kind of thing that was on my mind.

This solution came to me in a flash one day, and it was ultimately got Jack out of diapers.  You see, he loved to drink juice.  Granted, at that point in his life, what that meant was a cup filled three-quarters full with water with the rest filled with a 100% juice.  So, I decided that every time he asked for more to drink, I would say, “Go try to use the bathroom first.”

Unless your child has a special or medical need, they will likely just get to a point where they finally go on their own.  You’ll have to teach them about it, so I’m not suggesting to just ignore it and expect that one day they’ll say, “Excuse me, Mom, I’d like to use the restroom now.”  They have to know what to do, so you’ll need to train them.  But, there just comes a point where there’s no point to push it.  If they’re not ready, they just may need more time.

I still remember our pediatrician, the father of a large family, pointed out that small children only get to have control over a very few things in their lives, and using the toilet is one of them.  If you try to force it, nobody will win that battle.  Everyone will just end up being miserable.

This was the way that finally worked for Noah.  After a long time of no successes and even fear of the toilet, one Wednesday night out of the blue, he just announced, “I need to go the bathroom!”  We were puzzled for a moment before realizing that he meant in the bathroom.  It sounds crazy to say, but from that moment on, he used the toilet.  He just needed to be ready, I guess.  And, when he finally was ready, he was ready.

How has potty training gone at your house?  Was it a struggle or a breeze?