The following is a post from contributing writer, Becky Spence of This Reading Mama. 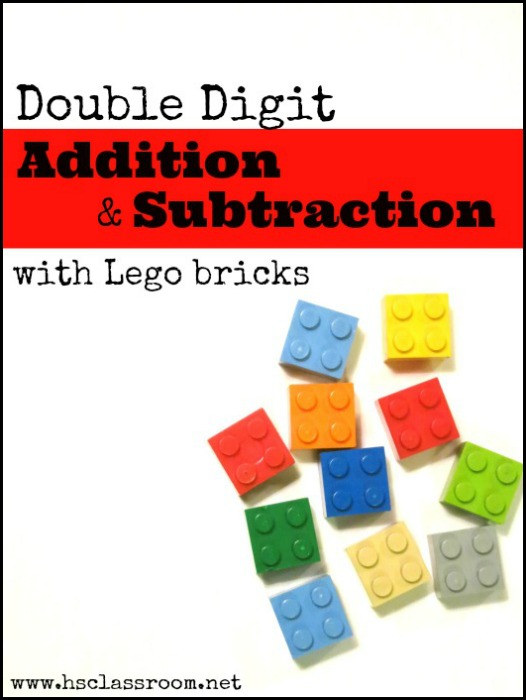 I can vividly remember being thoroughly confused in the second grade when it came time to borrow and carry with double digit addition and subtraction. I remember saying over and over again, “I don’t understand why you cross out that number and write that other number. How do I know when to do it?” I simply could not wrap my brain about how it worked. The concept was too abstract and I needed something concrete!

I also remember how frustrated my teacher got with me. “You just do!” she’d say, with no further explanation. Unfortunately, it took a few months for me to figure it out. But once I actually learned the “why” and “how” behind it, it made total sense.

So, this was the big year. The year I’d have to actually teach this concept to my own second grade son. One thing I knew for certain- I was going to SHOW him how it worked in a concrete manner before I started crossing through numbers and abstractly talking over his head. Since my second grader loves his LEGO bricks, I incorporated them into this math lesson as he learned about regrouping and borrowing with double digit addition and subtraction. Here is how we did it. 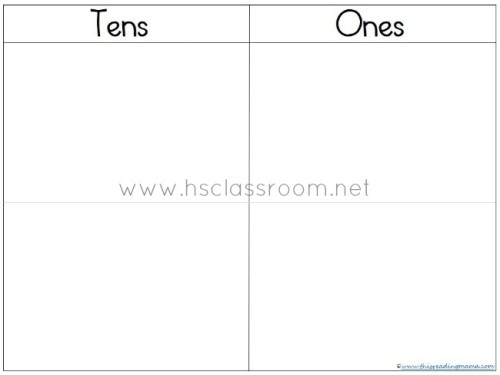 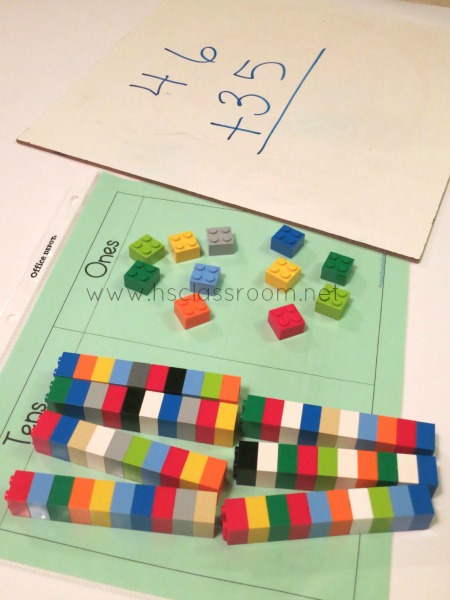 First, I wrote the addition problem on a dry erase board. He used his stacked and loose Lego bricks to build the top number above the faded horizontal line and the bottom number under the line. 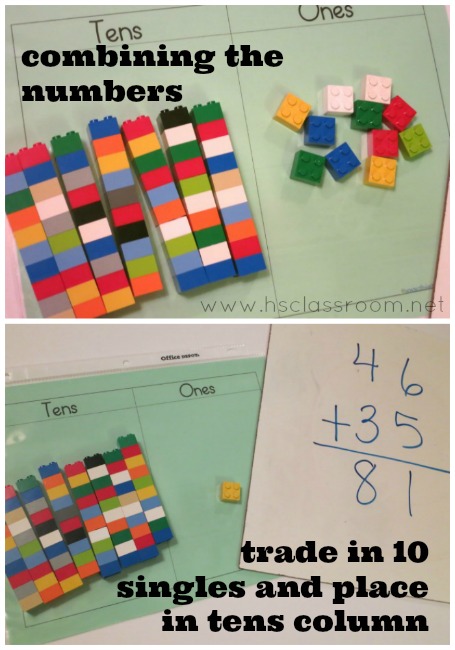 Once both numbers were built, he combined the tens and the ones together in one space. Now, he could clearly see that the ones column had more than 9 single pieces of Lego bricks. So he took out 10 loose pieces from the ones side and traded it in for another stack of 10. The new stack of 10 was placed into the tens column. This left the ones column with just one single Lego brick. And the tens side had 8 for a total of 81.

We did this multiple times with Lego bricks over a couple of days until he could do it without assistance. {I made up my own addition problems each time, being sure that it required him to carry or regroup from the ones column. You could also find a workbook page that has these kinds of problems and use them instead.} 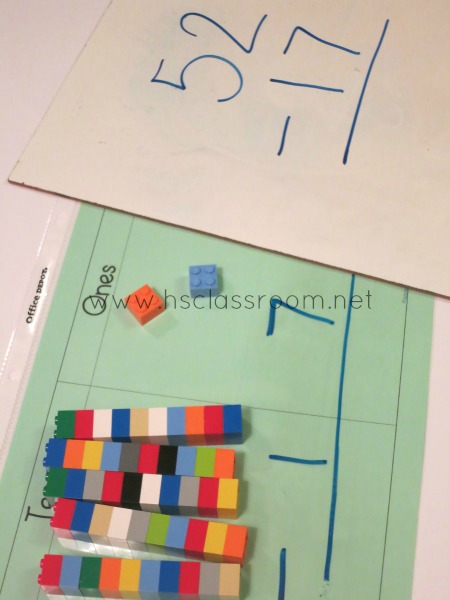 We did subtraction a little differently because building both numbers out of Lego bricks on the mat can become confusing once it is time to actually subtract. Instead, he built the top number in the equation with his Lego bricks and the bottom number was written below the faded horizontal line with a dry erase marker. 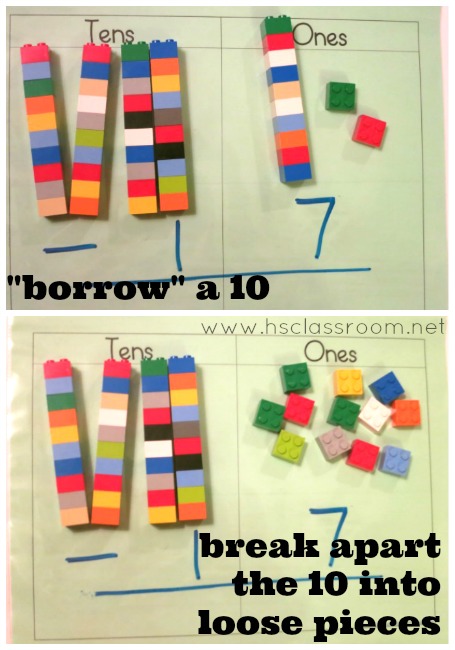 Once the top number had been built, I said something like, “Look in the ones place. The problem is asking me to take 7  away from 2. Since I don’t have enough in the ones place on top, we need to borrow a ten from over here.” He took a stack of ten Lego bricks from the tens column and brought it over to the ones side. He broke the stack of ten apart into 10 loose pieces. Once they were broken apart {with 12 single pieces}, we took away the bottom number from the top number on both the ones and tens side. We spent a couple of days with this routine until I felt he was comfortable doing it with independence.

I loved that my son was able to explain to me WHY it is necessary to borrow and regroup in these problems, something that took me months to verbalize as a young child. Now that the concrete foundation has been dug, I hope that he won’t have the same problem I had when it comes to crossing out those numbers!

If you think this activity will work well for your child, you might want to try these: Becky Spence is a homeschooling mama to four little blessings who keep her on her feet {and knees}. She is passionate about teaching, specifically literacy. She is the author of This Reading Mama, where she shares reading and writing activities as well as free literacy curricula and printables. You can connect with her on Facebook, Twitter, Pinterest, and Google +. 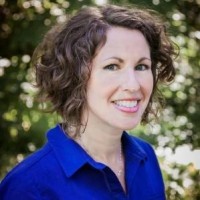 Becky Spence is a homeschooling mama to four little blessings. She is passionate about teaching, specifically literacy. She is the author of This Reading Mama, where she shares reading and writing activities as well as free literacy curricula and printables. You can connect with her on Facebook, Twitter, and Pinterest.