You are here: Home / Blogging / 7 Reasons I’m Glad I Merged All of My Blogs into One Site
advertisement
465shares

In May of this year, I merged Many Little Blessings, The Homeschool Classroom, Catholic Mothers Online, and Catholic Printables Online all into one site – Real Life at Home.  Considering that three of the four sites were six or seven years old, it was a huge decision to merge all of the sites together. 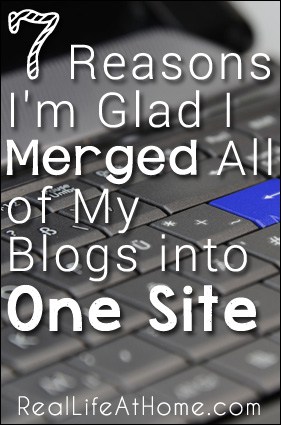 As inviting as it sounded to have just one site, it was also a scary prospect.  I was afraid about what it would mean for my traffic and my income.  I finally had to weigh my own happiness and sanity against those things, and just went for it.

While I did, indeed, see a loss in income, as well as some followers of the individual sites that weren’t pleased, I would still do it again, if I had it all to do again.  Sure, the merging process was tedious.  But, once it finally came together, I was so pleased.

In fact, I decided to share seven reasons I’m glad I merged all of my blogs into just one site.

1. I don’t have to worry about content creation on four different sites.

Writing posts and creating other types of content is a lot of work.  If you’re a blogger, you already know that.  Now, imagine trying to do it over four different sites.  Even with the help of contributing writers on two of the sites, it was still a huge undertaking.

I was shocked when I moved to having just one site.  I started to worry about having too many posts each week, so I’ve had to try to find a happy medium.

Right now, at a time when I’ve been very busy, it has also taken off a lot of pressure.  I don’t have to worry about cranking out content.

2. One site shares all of the stats of the old sites (plus some).

As someone who has often loved to look at site stats, it would sometimes make me sad when one of my sites would get big traffic spikes.  I know that sounds crazy, but it always seemed to coincide with a time when another of my sites was having lower traffic.  Sometimes I just wished that all of the numbers could count together.

Obviously, now they do!  In fact, my pageviews have typically been higher with the new site than they were with just adding up all of the old individual sites’ stats.

3. I now only need to do plugins, themes, and WordPress updates once.

Well, okay, sure, I need to do those things a lot.  But, with one site, I only have to do the same update once.  When I had four sites, I had to do things like update WordPress four times for each new release, since I had to do it on each site.  Ditto that for plugin and theme updates.  What a pain!

4. I can be more focused in promotions.

It’s a ton of work promoting blog posts.  I remember back in the day when writing a blog post meant you just hit publish and waited for people to show up.  Sure, it also involved being sure to visit other people’s blogs and comment, but it looked nothing like the amount of promoting that publishing a blog post takes now.  Trying to promote posts on just one site can take a lot of work.  Doing that times four is a ton of work.

It’s so nice to only need to work on promoting posts from one site now.

If you have multiple sites, you probably have social media accounts for each site.  For example, I had a Facebook page for each of my four sites.  That’s a lot of Facebook pages to take care of.  Not only did I need to find things to post about on each of the Facebook pages, but I needed to monitor them for things like spam as well as followers who had questions.

When I was trying to run multiple Facebook pages, it usually meant that I was focused on one or two of them, and then pretty much just ignored the others.  That’s not really a great business model.

6. I can take more time to work on big projects without worrying about ignoring other sites.

Sometimes, when working on a big project, such as a the St. Mary and the Rosary Printables Packet, I have to not work on the site quite as much so that I have time to work on the project.  With one site, that seems to be working out just fine.  Or, at least passably.  But, when I used to work on a big project in the past, it meant that I was barely working on a site or two and then totally ignoring other sites.  Again, not a great business model.

When running multiple sites, you typically (but not always) have more hosting costs, as well as the need to buy some things like plugins multiple times.  (Paid plugins often have one cost for a single site and then a larger cost when you’ll be using it over multiple sites.)  Having multiple sites can also increase the chance that you’ll need to hire help.

If you’re a blogger, how many sites do you have?  What have you found to be the benefits and drawbacks of having that number?

Previous Post: « 9 Reasons You Should NOT Homeschool
Next Post: Autumn is a Second Spring Free Art Print {Two Color Choices} »