You are here: Home / Uncategorized / 10 Things I Would Like to Do Someday {10 Days of New Experiences} 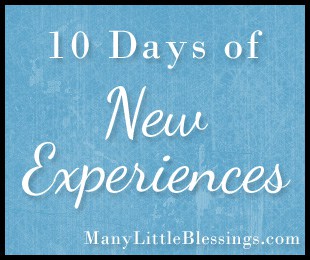 This week and next week (Monday through Friday each week), I will be participating in iHomeschool Network’s Hopscotch with the topic of 10 Days of New Experiences.  The experiences vary from simple to more complex, and hopefully you’ll enjoy the variety.

I’ll be sharing what the new experience we did was, what I expected beforehand, how the experience actually went, and if I would do it again.  In the next two days, you’ll get to read about me shooting for the first time and then about the kids and I having our first meal from a food truck.  Yep, like I said, the experiences certainly will vary.

Of course, you may notice that today is one of the days and this is not a new experience.  That’s okay, nine new things may be about all I have in me.

For today, I just wanted to let you know what to expect over the next two weeks, as well as to sneak in a Top Ten Tuesday list and link up.  To go along with the New Experience theme, I thought I would write about 10 things I’m not going to be able to chalk up as part of my New Experiences series this month, but that I hope one day to count as a new experience.

1. Visit Vatican City and Rome.  I know, it’s such a Catholic thing to start off with, isn’t it?  When I think of it though, it makes me smile as I remember our priest telling Eric and I something about a trip he took there and he said, “You’ll see when you go to Rome one day.”  I even loved it right at that moment.  He didn’t say if we went to Rome, but when.

3. Get ahead in my online work consistently over a period of time.  You know, with that period of time being more than five minutes.  One of these days, I feel like I should be able to get my blog stuff and email under control.  I have yet to figure out how to do that yet though.  It just seems that, somehow, I should be able to figure out a plan.

4. Go to the Pacific Northwest.  Thanks to Savvy Blogging Summit, I have been as far west as Colorado.  Before their first two conferences, the farthest west I had been was Minnesota.  The Pacific Northwest has long been on my travel list.

5. Take a cross country train ride.  Okay, it doesn’t really need to be completely cross country, but I think it would be a great family experience if we went far enough to go somewhere we’ve never been, and maybe even get a sleeper car.

6. Visit Paris.  Yes, I have noticed that a lot of my things include traveling.  There are just so many amazing places to see in the world, I can’t help it.

7. Own a sports car.  I know, this surprises me as much as it surprises some of you that know me well.  I can’t seem to stop noticing sports cars lately, and it would be fun to have one some day.  Of course, I opted to have kids rather than to have sport cars.

8. Proficiently play a string instrument.  It’s no secret that I have been wanting to play the guitar for a while now.  I have my acoustic guitar that I really need to practice on more.  I also have my eye on some other instruments, though I know I should really focus on the one that I already don’t have enough time for.

I had to specify a string instrument because once upon a time, I played the flute.  Of course, I would have no clue how to play it now, but I spent five years right smack in the middle of the flute section, just trading back and forth chairs with my friend Tricia.

9. Write a book.  Not just an eBook.  A printed book.  Of course, I have no idea what I would have to write about, but what writer doesn’t think that having a book in print sounds like a pretty swell idea?

10. Live for 6 months to a year in a completely different part of the U.S. or in another country.  Eric and I have both spent our whole lives living in the Midwest.  While I’ve lived in two different states in the Midwest, he’s only lived in one.  It seems like it would be a good adventure to spend some time living in a completely different part of the country or even in a foreign country.

What are some things that you would like to do someday?