You are here: Home / Memories / Why Noah Had Difficulty with Ode to Joy 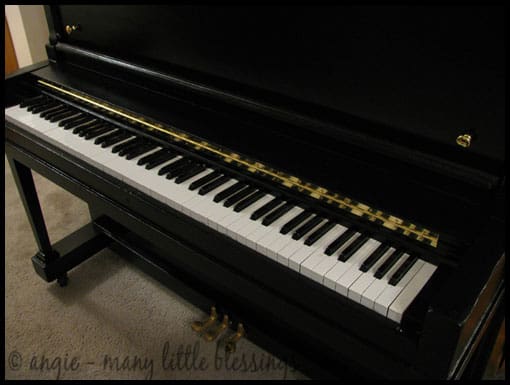 One of the first real songs (other than “Hot Cross Buns”) that we all recognized that both of the boys played was “Ode to Joy.”  It’s a song that I have loved for a long time, so it was fun for everyone.

Now that Noah is in the next set of piano books, he has reached “Ode to Joy” again.  However, to his surprise, it is harder than it was in the beginning book.  While struggling through it one day, he said, “I just don’t get it.  I used to be so good at this song and now it’s hard.”

I gently encouraged him and said, “The version you played before was an easier version.  This one is a little harder.  And, some day, you’ll probably play a version that is even harder.  Ode to Joy is part of a whole symphony, so it’s a complicated piece.”

Noah accepted this, but still seemed a little down.  Then, with a sudden gasp and realization, he exclaimed as he pointed to information about the song in his book, “Wait!  This says it’s from the NINTH SYMPHONY!  I think I’m only supposed to go to the eighth one.”

Oh!  No wonder it was so hard for poor Noah!  He had gone one symphony too far.

Okay, maybe not.  I did have to turn away and snicker before talking to him about the fact that this wasn’t why it was harder.  Still — it was a good try.

Previous Post: « Vegetable Alfredo Lasagna
Next Post: My Legs May Be Tired, But We Have a Lot of Strawberries »