You are here: Home / Family Life / Disney / What We Ate at Walt Disney World on the Standard Disney Dining Plan (Days 1 – 4)
70 shares 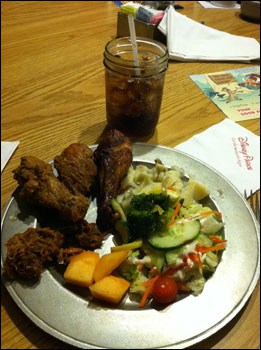 I was really intimidated about the Disney Dining Plan before we went.  But, since we were so lucky to have booked a package during a time when we got a free dining plan (for each person) for our entire stay, it was something that I was going to have to figure out.  One great help for me was my friend Nony’s site, What We Ate with Mickey.  What We Ate with Mickey  is a journey through what their family of five ate on the Quick-Service Dining Plan.

Due to the resort we stayed at during the free dining deal, we got the next step up in meal plans, which is the standard Dining Plan.  It includes one quick-service meal (typically a counter service meal), one table service meal, and one snack per day for each person.  (This is for the total number of nights you are staying.)  Since we stayed for eight days and seven nights, we each had seven of each of those items.

I had the idea that I would take pictures of each meal and have this lovely series of posts like Nony did on her blog.  I realized that she is far more disciplined than I am, and I just took periodic pictures.  I decided that I would still love to share with you what it looks like to be on the standard Disney Dining Plan.  Including in my descriptions are myself and the three kids (two of whom count as adults, since they are 10 and 12).

Unless I note otherwise, all of the food was included in our plan and we didn’t pay extra for it.  It is also important to point out, however, that all the table service meals had to include tips, which we paid for out of pocket.

Day One on Disney Disney Plan

We had actually driven to Orlando the day before and stayed at the Staybridge.  (Which was fine, but I wouldn’t stay there again.)  They offered a free breakfast, and so we filled up on that. 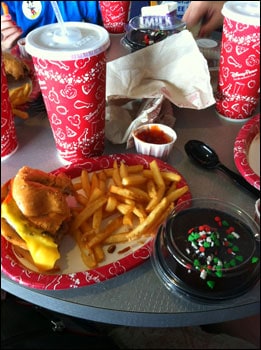 Cosmic Ray’s Starlight Cafe (Magic Kingdom) – All three adults got Angus Cheeseburgers, fries, a drink, and a triple chocolate cake.  Child credit was used for chicken nuggets, carrots, grapes, and a drink.  (Molly’s dessert, which she didn’t really get to pick, was grapes.  She was very good-natured about it, as she enjoys fruits and vegetables.  However, I gave her half my triple chocolate cake as well.)  (Quick Service Credits Used: 4)

Trail’s End Restaurant (Disney’s Fort Wilderness Resort and Campground) – This is a buffet place, and it was pretty good.  We all got the buffet with a drink.  There were lots of options (enough to appeal to all ages), and everyone had plenty to eat.  We took the ferry from the Magic Kingdom to get there, and though we had reservations here for later in the week, we decided that it wasn’t good enough to merit taking a trip all the way there again. (Table Service Credits Used: 4)

We snacked on a couple of things that we had in the room.  We then ran down to Cafe Rix at the Coronado (where we stayed) for one chocolate chip muffin (which Jack and I split) and one cinnamon roll (which Noah and Molly split).  (Snack Credits Used: 2)

Liberty Tree Tavern (Magic Kingdom) – I got the Pilgrim’s Feast (which includes turkey, mashed potatoes, stuffing, and a vegetable (I think it was green beans), a drink, and the Ooey Gooey Toffee Cake.  The boys each got the Angus Cheeseburger, fries, a drink, and ice cream.  Molly got a cheese pizza, grapes, a drink, and an ice cream sundae. (Table Service Credits Used: 4)

Tasty lunch!  We ended up cancelling a reservation that we had here for later in the week, but that was because we were able to add in Chef Mickey.  The only downside to this restaurant was that we were there for quite a long time (more than an hour).

When we got hungry in the late afternoon, we got two popcorns to share between the four of us.  This was more than enough.  (Snack Credits Used: 2)

Wolfgang Puck Express (Downtown Disney) – Delicious!  I got the four cheese pesto pizza, a drink, and the vanilla bean cheesecake.  (Holy cow – that cheesecake was good!)  One of the boys ordered the adult chicken strip meal, which came with several chicken strips and fries.  The other boy and Molly each ordered the cheese pizza from the children’s menu.  All of the kids got a drink and a frozen yogurt with sprinkles.  (Quick Service Credits Used: 4)

We slept in, so we just grabbed some breakfast bars that we had in our room and then rushed off to Disney’s Hollywood Studios for our lunch reservations.

Hollywood and Vine (Disney’s Hollywood Studios) – This was the first of our character meals for the week.  This fun buffet restaurant not only features some tasty food (I loved some chicken dish on the buffet), but there is also June from Little Einsteins, Handy Manny, Secret Agent Oso, and Jake from Jake and the Neverland Pirates.

My kids are older than Playhouse Disney’s target demographic.  But, I made the reservation when I was initially having difficulty getting into character meals.  The kids did really enjoy meeting characters.  Probably too much, because the younger two didn’t eat as well.  We all thought the food was good though.

While I did read a lot of people saying that you get more time with characters at Hollywood and Vine, I didn’t necessarily find that to be the case.  While June came to our table twice (once right after we sat down) and then Secret Agent Oso once shortly after June’s visit, we actually had to ask the waitress if Handy Manny might be coming our way eventually as our meal was winding down.  We then asked her again when we were done, and her reaction indicated to us that she had probably let someone know.  We did finally have our visit with Manny.  Jake never came to our table at all, but since his show wasn’t one we were familiar with anyway, we didn’t worry about it.  (Actually, I had to ask my kids who he was.)

I would eat there again, but might not make it a priority to do again.

We had reservations to 50’s Primetime Cafe, but ended up not using them, as everyone was getting tired and it started to rain like crazy.  (This also meant that I had to give up my chance to ride Star Tours.  Boo!  Guess I’ll have that at the top of my list for our next trip.)

Wolfgang Puck Express (Downtown Disney) – Yes, this is where we ended up again.  When we began to eat, my Mom said, “You know how sometimes you have something that’s delicious, and then you go to the same restaurant again and it’s not as good?”

“Yeah…” I said with apprehension.

I had the rosemary chicken (although I almost just tried to tell you that I had the rosary chicken!) with mashed potatoes.  Delicious!  Seriously — crazy good.

Both of the boys got chicken strip platters (with fries).  Molly got the cheese pizza.  All of the kids got a frozen yogurt for dessert and I got the vanilla bean cheesecake again.  (My Mom swore by their brownies, and that’s the dessert she got each time.)

(Quick Service Credits Used: 4.  And, seriously – this is an amazing way to use some quick service credits!)

Rix Cafe at Coronado Springs – Each of us had something like a muffin, cinnamon roll, or chocolate croissant for breakfast.  (Snack Credits Used: 4)

Electric Umbrella – We had a later breakfast (our days kept getting started later and later as the week went on), so we weren’t super hungry by lunch time.  And, since we had a big reservation for dinner, we didn’t want to get overly full.

I shared a mushroom Swiss burger and fries with my Mom, and we used one of her meal credits.  Since she got a drink, I had to order one separately.  For the dessert, I got the strawberry cheesecake.  Noah and Jack shared a chicken strips meal with fries and a dessert.  Molly got a cheeseburger, grapes, and a cookie (as best as I can remember on the sides).

I wasn’t as crazy about this meal.  My Mom thought the burger was just great, but I wasn’t impressed.  I also thought the strawberry cheesecake (which isn’t what I would have called that dessert) was just kind of odd.  Everyone ate everything (well, not the whole strawberry cheesecake), but I can’t say that I would go there again.  However, my Mom still says she thinks the burger was great.  So, maybe it was just me.

Chef Mickey’s (Contemporary Resort) – This ended up being everyone’s favorite table service meal.  I had been trying to get a reservation for months, but then lucked into one a couple of days ahead of time (while we were already at Disney World).

Chef Mickey’s is a buffet, and the food is just fabulous.  We all agreed that we would definitely want to go again!  We also found this to be our most expensive meal, so we were really glad to have the Disney Dining Plan (though we, of course, had to leave a tip).  I happily left a tip, however, as the service was also very good. 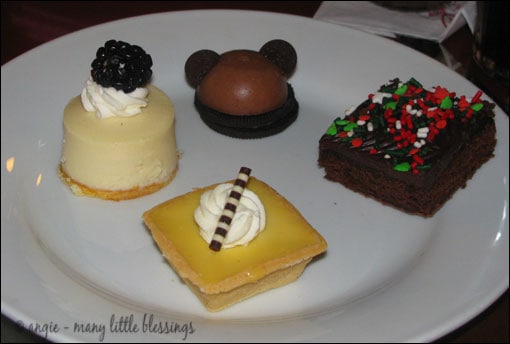 Chef Mickey’s is a character meal, with appearances from Mickey, Minnie, Donald, Pluto, and Goofy.  The characters visiting tables seemed very well orchestrated here, and they were careful to go back to where they left off (when they would leave for breaks or other reasons).  All characters came to our table, which meant that Molly finally got to meet Minnie!  (Table Service Credits Used: 4)

Tomorrow, I’ll share what we ate on the rest of our days.  (It’s just too much to share all in one post without writing a novel.)

My sister has recently written about eating at Walt Disney World as a vegan.  If you have special dietary needs, you might want to check out her post.

Tip: One of my favorite resources for menus from all of the restaurants in the parks and resorts (as well as maps, wait times, etc.) is the Disney World Magic Guide app. I used this about a million times during my planning and during our time at the parks.