You are here: Home / Projects / DIY and Projects / Using Scrapbook Layouts to Decorate Your Walls
98 shares

This week’s Works for Me Wednesday theme is a “Great Tip” theme. I picked one of my past WFMW posts (from January 2008) to repost. I will admit to being a flunkie and I still have the exact same layouts up on my wall today as I did two years ago. Maybe I’ll change them again soon.

Sometime last year, I decided that I didn’t like my wall arrangement of photographs in our dining room. It was made up of around seven framed photographs — ranging from 4×6 to 8×10 (and only one of those!).

First thing — bigger pictures do tend to look better on the wall. So, I knew I wanted some larger framed pictures than I had.

(If you want to read more about why you should use bigger pictures on your walls, you can read a piece that I wrote in November 2009 called “Why You Should Choose Larger Portraits for Your Walls.”)

Then, I was at Michael’s and saw their $9.99 black 12×12 frames that are sold as “album frames” (you know — record albums). They were 50% off, so I picked up seven of them. I then picked seven scrapbook layouts, and have them hanging in our dining room. 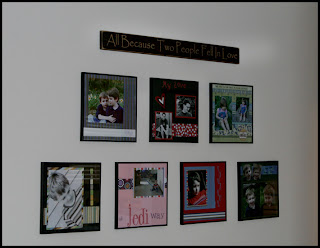 I get so many compliments on these! It’s different than just having photographs framed, and it’s very visually appealing. I will point out — my layouts don’t coordinate with one another. I just picked favorites that were fairly recent (within the past year) and made sure everyone in the family was represented. 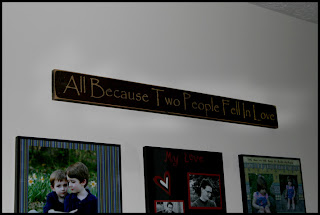 So…if you’re a scrapbooker (or could at least do up a few layouts), this is a great way to frame something a little different than your average photograph. 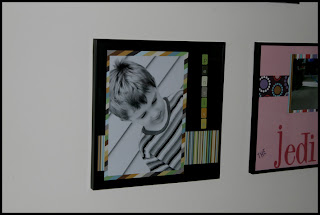