You are here: Home / Memories / The One Where Molly Thinks Eric is Far Too Strict 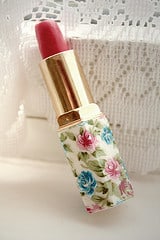 Molly has a few friends who have play make up sets.  She covets those things.  I see her stare longingly at that type of thing in the store before she turns to me and says, “Daddy wouldn’t like me having that.”

I had been aware for quite some time that Molly thought this was unreasonable.  But, today, I got a whole new perspective as to exactly how much she thinks it is unreasonable.

Molly got to be with my Mom today while she was getting ready and putting on make up.  (I don’t personally wear make up, so she doesn’t get to see such fun things like that.)  My Mom told me about how impressed Molly was with her make up, declaring something along the lines of never having seen so much make up.

Molly told my Mom (I found out later) all about not being able to wear make up until she’s in seventh grade.  She, with all the gusto of a first grader scorned, shared with my Mom that she definitely thought she was ready for make up now.  And, if not now, then at least by next year.  (Yes, I did burst out laughing when my Mom told me this later.)

Then, my Mom cinched the praises that she received all day long — she put some lipstick on Molly.  After this p0int, Molly had to tell me (and apparently my Mom as well, as she shared later) about how lucky she is to have Grandma, what a wonderful Grandma she is, and how special Grandma is.

Finally, in a move that makes me already feel gray hair talking about coming in when she is a teenager, one of the first people she wanted to show this lip stick to was…

Oh, yes, of course you know who it was.  It was Daddy.  Daddy, who with raised eyebrows, said something along the lines of, “Humph.”  Okay, but he also did compliment her on her sparkly lips, at least begrudgingly.  Her excitement was pretty palpable, so it was hard for him not to do so.