You are here: Home / Memories / The One Where I Got Chocolate on My Pants 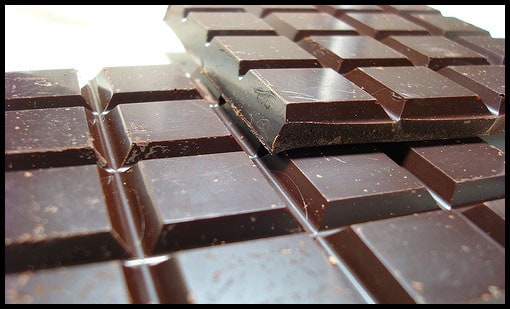 Many years ago, my Mom and I went on a road trip to meet friends we had met online to go scrapbooking with them.  It was on that trip that a still infamous event happened – I got chocolate on my pants.

Okay, I know.  This doesn’t sounds particularly monumental, does it?  But still, ten years later, I still get asked to tell the story of the event.  You see, it wasn’t so much that it happened, it was more what ensued after that fact.

So, let me start you where it all began.  A Dairy Queen in Illinois.  That’s where my chocolatey troubles began.  I honestly didn’t even want to stop, but got a dipped cone anyway.

We went out to the car to just eat our snacks and drive.  Because it was warm out, the cone was already dripping like crazy by the time I sat down.  I desperately licked away, trying to save myself from an ice cream mess.  Crisis averted.  Or so I thought, of course.

During one point in trying to eat the ice cream, I thought a piece of chocolate coating fell.  But, since I couldn’t find it, I dismissed the thought.  In retrospect, though there wouldn’t have been a whole lot I could have done, it was dumb to think that I saw chocolate drop and not go all Sherlock Holmes on trying to find it.

Fast forward a ways down the road, and it was a time to stop at an Interstate rest stop.  My Mom and I both used the restroom, and as we were washing up, she gasped and then started laughing.  In fact, she kind of couldn’t stop laughing.

Mom pointed to the front of my linen pants as she laughed, “You got chocolate on your pants.”

Yep, a smear of chocolate right on my pants.  Mind you, since I was young and dumb and it was just one night, this was my only pair of pants.  It, of course, made matters much worse that my Mom was laughing.

In that moment, I lost all sense that I was an adult.  I was a mother.  Instead, I may have thrown a temper tantrum right in that rest area bathroom.  I’m sure it was probably hilarious.  Of course, my clue to the hilarity was that my Mom was still unable to stop laughing and was now shedding tears from laughter.

“What kind of mother are you?” I muttered.

“I’m…sorry…” she sputtered out with her laughing.

It was right as the brouhaha was winding down that another mother and daughter team around our ages came into the restroom.

“She got chocolate on her pants,” my Mom said bursting into laughter again.  God love her, she just couldn’t help it.  Have you ever had one of those times where you shouldn’t laugh but that just makes it worse?  I think that was what she had going on.

The mother and daughter duo then also started laughing because they said that they have those kinds of times too.  Yes, I now had complete strangers laughing at my few inch mark of chocolate on my pants.

Finally, my Mom pulled it together.  We walked out of the restroom, and it was only moments before someone passed us and looked down at the front of my pants.

“It’s chocolate,” my Mom sputtered out in a quick and quiet tone as we walked past them.

After we passed, I said, “Don’t tell them it’s chocolate.  Let them think it’s blood or something.  I don’t need people being concerned, finding out it’s just chocolate, and then thinking, ‘Oh yeah, the fat girl has chocolate on her pants. That totally makes sense.'”

This, of course, got her on the verge of laughter again.  She was then thrown over the edge by our new mother-daughter duo friends who, seeing she was still laughing after all this time, pointed to us in solidarity and burst out laughing again.

In fact, we had to sit in the parking lot as Mom composed herself so she could drive again.  We were then, thankfully, able to stop by a Target on the way where I picked up a new pair of pants (only after she had to tell the people why I wanted to wear the new pants out) and we drove along our way.

I still remember being so frustrated in that restroom.  I had done something dumb and there was a very chocolaty consequence to it.  But, I knew even at the moment that this was going to be a bathroom stop to remember.  The tears streaming down my Mom’s face confirmed it.

Years later, I heard someone say that if you have a choice in life, pick the option that will give you the best story later.  I guess that’s why I still like to order a dipped cone at Dairy Queen.  You just never know what kind of story you’ll end up with.

Previous Post: « 10 Saints to Have in Your Corner as a Catholic Mother
Next Post: 10 Great Educational Tools For Children 2-5 »