You are here: Home / Family Life / Parenting / The Moppy (and Other Toddler Things I’ve Forgotten) 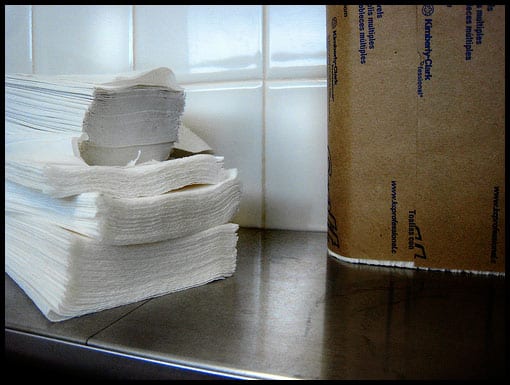 Isn’t it funny how the are things that your children do or say that you think, “I’m going to remember this forever.”  It might be a mispronunciation (like when our Noah would say “your” instead of “you,” such as “How are your doing?”) or a certain quirk or mannerism that is so indicative of some time in their lives.

In my almost 13 years of mothering, I find that more often than not, if I don’t record those things in some way, I forget them, even if I thought I never would.  They are relegated to mentions like this, “Remember that funny way that Jack used to say that?  What was that?”

Sometimes, there may be a trigger that reminds you years later.  Maybe it’s a certain location or situation, and it comes flooding back.  “How did I forget that?” you may think.

I don’t know how this started, but I imagine it just happened one day out of the blue.  Molly would insist that she had to grab a piece of paper towel from public restrooms.  She would keep it and cherish it for a time before we were able to throw it away.  She began calling it Moppy.

This became something to do at every trip to a public restroom.  If you would try to take her out before she had a chance to grab a Moppy, she would make sure that it was clear that she was not leaving without a Moppy.

I even clearly remember my first trip to The Melting Pot with my Mom, a couple sisters, and my aunt.  When I saw the nice, thick guest paper towels in their restroom, complete with their logo on it, I thought, “Wow – that’s a nice Moppy,” and I had to take one home to Molly.

The funny thing is this — I don’t remember when it stopped.  I have no memory at all.  I thought we would be doing it until she was in college, perhaps.  But, in the end, I don’t even remembering it ending.  I don’t recall if it was gradual or just stopped suddenly one day.  Either way, it stopped and I almost forgot about this staple in our lives for so long.

Life is funny like that.  I often think of the saying I read once about life — the days are long, but the years are short.  As I’ve gotten older, I’ve understood that more and more.

Do you have any favorite little things that your kids used to do when they were little?

Previous Post: « 10 Reasons to Homeschool Your Creative Child
Next Post: 10 Read Aloud Books that I Could Read Over and Over »