You are here: Home / reviews / The Game of Scattergories: Bible Edition {A Review} 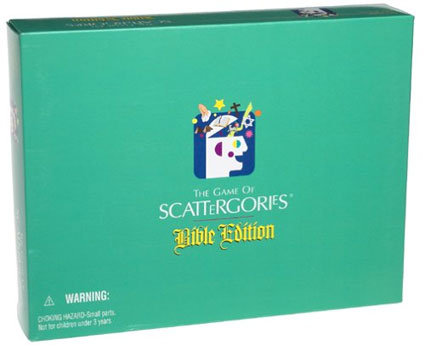 Since the regular version of Scattergories has long been a favorite game of mine, I was thrilled to get a chance to try out the Scattergories Bible version recently thanks to Discount Catholic Products.  While I wasn’t exactly sure what the kids would think of the game, they were up for giving it a try and I was ready to coach them and snap some pictures.

Well, I’ll be completely honest, because I know that’s what you would expect from me.  This was the scene at our house during the first round… 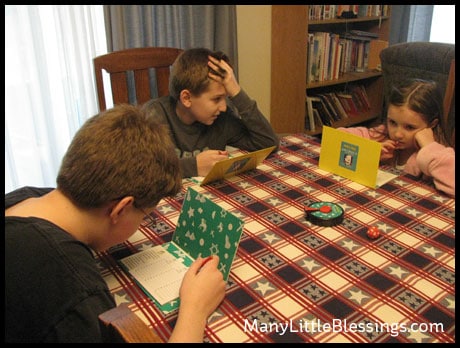 When Eric saw the picture, he both burst out laughing and asked if I was really going to use that in the review post.  I told him that I really was going to, and here it is, just for you guys.  I love that a couple of the kids look so over the top that it looks staged.  It was not.

But, wait.  Don’t jump to the conclusion that I don’t recommend the game.  Give me a minute first.

We actually did enjoy the game.  We just enjoyed playing it in an alternate way and I would actually recommend the Scattergories Bible version for several reasons.  So, let me share some ideas with you about ways to play that aren’t strictly according to the rules but that make it a great game for lots of kids (even those that, like some of mine, aren’t crazy about timed games). 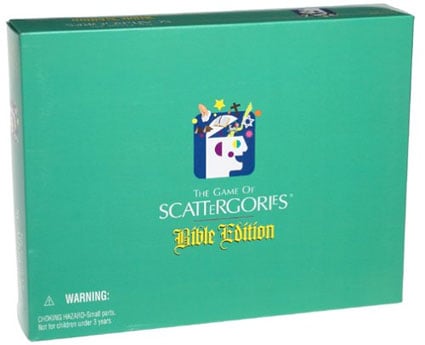 Uses for the Scattergories Bible Edition

So, even if our first attempts at the game just as it came in the package left the kids scratching their heads (literally), we loved the game with some modifications that were perfect for us.

With the rush of the holidays done, these long, cold winter nights are perfect for family game nights.  Perhaps Scattergories Bible Edition would be a good match for your family!  Thanks to Discount Catholic Products for the chance to add it to our family game collection.

Disclosure: I received the game to review and was able to keep it after reviewing it.  In addition to the game, I was compensated for my time in reviewing the game and writing the review.  All opinions are my own.