You are here: Home / Catholic Life / Noah Did His First Reconciliation Last Night!

Here’s a long (sorry) recap of First Reconciliation, which was last night:

We had a nice reconciliation service, so it was nice that it eased the kids into it, and it wasn’t like they went in and had to get in line. And, that way, also, the children got to say that Act of Contrition (a prayer with some kind of weighty words, for people who are unfamiliar with what that is) all together instead of individually during their confession. (This was particularly good, since Noah is not a strong reader. It would have taken him forever. )
One of our priests did the homily, and it was really good. He talked about how we have to take the trash out at home often, and about what it would be like if all that trash built up at our house. And, then he made an analogy of sins being like trash, and that in reconciliation, we are asked Jesus to take out that trash. But, that just like the trash needs to be taken out regularly at our house, so do our sins, etc. It was really understandable for the kids, and I liked the analogy. (Noah said he would like for Jesus to take out the trash inside 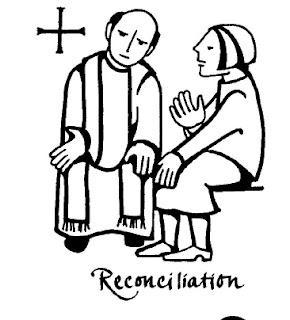 him. )
Noah had already said which priest he wanted to go to, and so once it was time for people to get lined up, we made a bee line to that priest’s line, which ended up being one of the longest. (They brought in three priests from other parishes, as well as then both of our priests. Of course, the lines for our priests were the longest.) Noah would have gotten in even more quickly, but one mother and an older brother of a child who was near the front of the line went to confession as well. (We were encouraged to go in all of the meetings we went to, but we were also encouraged to (1) Let the kids all go first & (2) Pick a priest other than from our own parish, since the kids would likely want to go to them. Oh well!)
Noah didn’t seem nervous at all, and just walked right in when it was his turn, and sat at the seat across from the priest. (He told us that afterwards. I think they encouraged the kids to do a face to face confession, which is all I have ever done as well, actually.)
After several minutes, he came out and gave us a thumbs up and had a smile on his face.
I had been terrified that he wouldn’t remember his penance, but he told me right away that it was one Hail Mary and one Our Father. We went up front to kneel at the altar. He did the Hail Mary all on his own, and then needed a little assistance with the Our Father, but not too much. (He did fine for a while, but once he got flustered, then he just kept getting flustered. Then again, he got so flustered that I to stop and say the whole thing in my head to help me because he even messed me up, since I was trying just restart him and not say it for him.)

Perfect for families! Each month you gain access to printable activity pages, crafts, home altar pieces, and more.
Never has living the liturgical year been so easy and affordable!
Join now for instant access to July's 100+ pages of printables and resources!
Then he got to light a candle to put on a display and he was done!
Well…except then we made him sit down and we got in line. He was okay with that though, and Eric and I both went to someone we didn’t know, but that we were very impressed with. It was a relief to have Jesus “take out my trash” too.
Really though — the priest pretty much just assured me that my sins weren’t really all that sinful, and that as a matter of fact, some of the things I confessed to were probably for the best. He gave me a penance of reading a particular portion of scripture, as a reminder that God wants me to be happy, and that I need to remember that and not always try to do too much or work so hard to make others happy all the time. So, I thought that was nice and something I maybe needed to hear.
When I was done with my confession, Noah threw his arms around me and squeezed me just about the hardest I ever think he has squeezed me. He said, “GREAT JOB, MOM!” What a sweetie!
We did then pop over to our social hall and had some cookies and punch, and Noah got a really beautiful certificate.
So, it was a really great night, and I guess it was silly to be so nervous. They deal with reconciliation in such a positive light at our parish, and that really is a blessing.