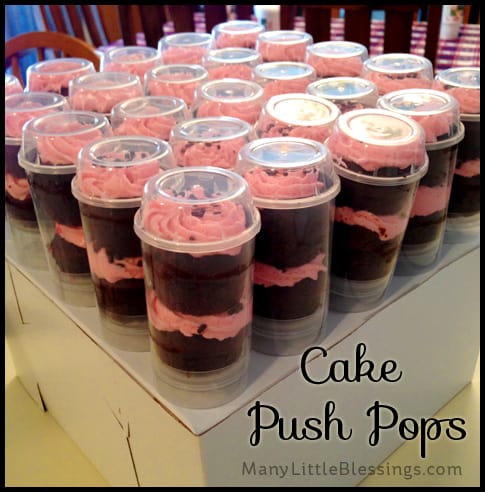 Making cake push pops, which would be for Molly’s First Communion party.

How I Picked This New Experience

I’m pretty traditional in my dessert making, but when I kept seeing cake push pops around (especially on Pinterest), it definitely caught my eye.  I was hesitant to try them, figuring they were probably more difficult than they appeared, but I thought it would be a fun addition to Molly’s party.

How I Felt About It Before The Experience

I also knew that I had to go ahead and make them because Eric used his super nerd powers (um, I mean his engineering prowess) to perfectly space out holes on a cake box to use as a cake push pop holder, since I refused to buy a stand for them (though I actually did buy one later for another event). 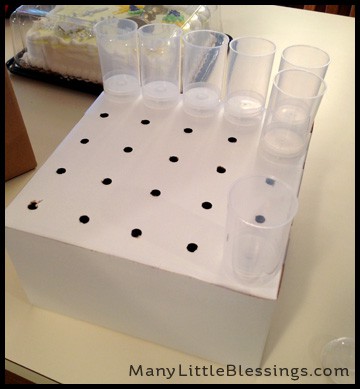 Seriously – isn’t that box the best?  I got it for less than $1, whereas stands were expensive. (They have since gotten much less expensive.)

That one ripped hole?  That was my fault.  Sorry, Eric.

Remember when I said that I figured that they would be harder to put together than I thought they might be?

Yeah, they were, and that becomes problematic when you are getting close to party time.  It was because of that that I decided that each cake push pop would consist of two mini cupcakes, rather than one.  I didn’t want to waste any of the cupcakes I baked, so I wanted to be sure to only have to make 26 cake push pops instead of 52.

Now, here are my words of wisdom if you should be inspired and decide to make them.  First off, yeah, do it.  More on that later.  But, second off, here’s my tip:

Hold the container upside down with the stopper all the way to the bottom, and then put the first cupcake in with you holding it upside down (so it will be in the right way when you’re done).  Then, as you’ve put it in, move the holder back upright so the cupcake doesn’t fall out and do the rest of the filling.  So much better!  I would have whipped through them if I started like that.

Would I Do It Again?

Yep, I definitely would, especially now that I have a better method for filling them. Plus, I can’t wait to experiment when I have more time and try new combinations.

I think these would be especially cool to take to things like bake sales or as a special treat for someone.

Oh, and one other cool thing?  I had planned to just put all of the pieces in my recycling, but my Mom (and a few other people) pointed out that they were made of a pretty sturdy plastic and could probably survive a trip through the dishwasher.  And do you know what?  They did survive!  So, on top of the large quantity that I still had left, I got to put most of the ones that I had already used and cleaned back into my stash for later.  Bonus!

These were definitely a fun and different dessert option.  If you want some other ideas for how to do them, check out my Sweets and Desserts board on Pinterest, since I have pinned several different cake push pop ideas there.

What are some of your favorite go to sweets that get a lot of compliments and comments?

This post contains a couple of affiliate links. They don’t change the price you pay, but we may receive a small compensation if you make a purchase.

Previous Post: « 10 Notes on Taking the Kids to a Large Art Museum
Next Post: End of the Year Portfolio Photo Collage »