You are here: Home / Holidays / St. Patrick's Day / My Guess As to How Seamus Colored Our Cool Whip Without Opening It
645 shares 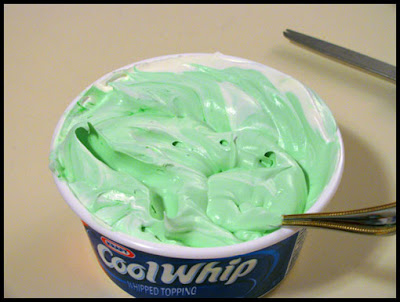 Last week, Seamus the Leprechaun came to pay us a visit for St. Patrick’s Day.  I have had a few people who wanted me to theorize how in the world Seamus did his little trick with our Cool Whip.  So, here’s where I take my guess.

Well, first, in case you didn’t read about it, we got our totally sealed package of Cool Whip out of the refrigerator after being told by Seamus in a note that he left us a trick in our Cool Whip.  (Seamus is lucky we had Cool Whip, as I never buy it.)  We cut open the seal and opened it to find regular Cool Whip.  Just in case a trick was hiding, we got a spoon and stirred it around to see if anything was hidden inside.  Imagine our surprise when our Cool Whip started turning green!  How crazy!

So, while I totally think that Seamus is just a prankster, I do have a guess on how he might have been so tricky, just in case you ever wanted to see if you could reproduce what he did for another holiday or April Fools Day.  (For the record, I don’t like April Fools Day pranks, but this would be pretty harmless, so I’m all for it.)

My guess on this step by step process:

1.  We already had the Cool Whip in our refrigerator.  If we hadn’t, I’m sure Seamus would have had to have allowed it to thaw first.

2. I bet he might have turned over the sealed Cool Whip container and used a steak knife to cut a long slit along the bottom.

3. From there, I imagine he would have taken a gel food coloring and stuck the tip of the green right inside the slit on the bottom of the Cool Whip.  I suspect he just went a little crazy putting a bunch in.

4. He would have had to have fit the opening back together, and wiped off any mess that got out (being careful to throw away paper towel that got food coloring on it).

5. Then, maybe he used packing tape to seal it all up on the bottom very well.  He probably would have known that my kids wouldn’t have inspected the packaging.  But, if kids were apt to do that, I wonder if he might have put some white paper over the opening before sealing it up.

6. Just because Seamus cares about the chance of leaks in our refrigerator, I bet he would have finished up by casually setting the container on a plate in our refrigerator.  He may be a prankster, but I bet he would be nice enough to not want to take the chance of getting food coloring on my shelf.  (For the record, he wouldn’t have needed the plate, but better safe than sorry.)

This is all just my guesses, of course.  Maybe you have a better guess than I do, or you might want to try a different guess for just certain steps.

Previous Post: « Seamus the Leprechaun Visited Our House This Morning
Next Post: Reworking Workboxes to Work for You »