Going to Disney: A Disney Character Autograph Tip is a post by Angie of Real Life at Home.

During our kids’ first trip to Disney World (in 2011), we were excited to whip out our autograph books to have a special keepsake from our trip.  Because we had a free dining plan, our trip included many character meals and we easily filled half of the pages in their autograph books. 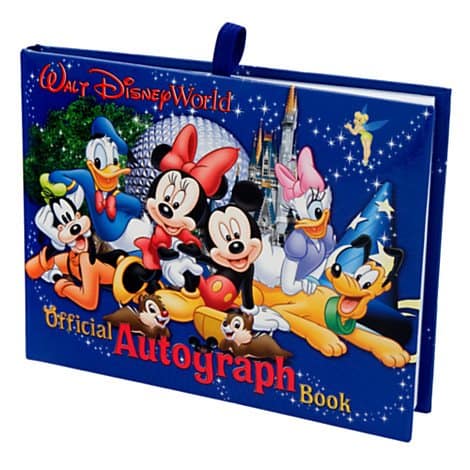 It was while we were waiting for Mulan on that trip that I saw the autograph books of the kids in front of us in line.  Whereas ours were just written in with pen, theirs featured lots of brightly colored Sharpie marker signatures.  All I could think was, “Oh man – that looks so good!”

So, when we returned to Disney World again the following year (2012), we came ready with our autograph books from the previous year and a handful of different colored Sharpie markers.  Although it meant a few extra things for me to carry, rather than just one large, character-sized pen, it was beyond worth it. 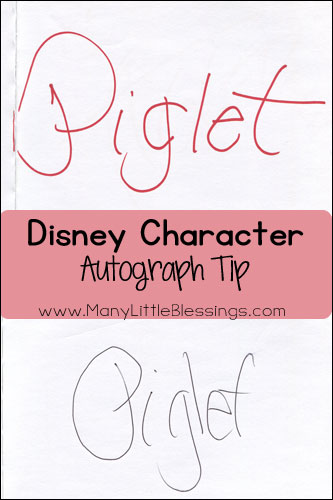 I picked Piglet because the signatures were extremely similar from one year to the next.  I know that they strive for that, but that’s not always the case, we found.  The pen version (bottom) was from our first year, and the marker version (upper) was from our second year.

While I know that the top one looks a bit better because it’s bigger, just look at the difference it makes to have that fun, brightly colored autograph, rather than the plain pen one.  Now, imagine if your whole autograph book was either filled with just plain pen or if you could turn each page and see more colorful marker. 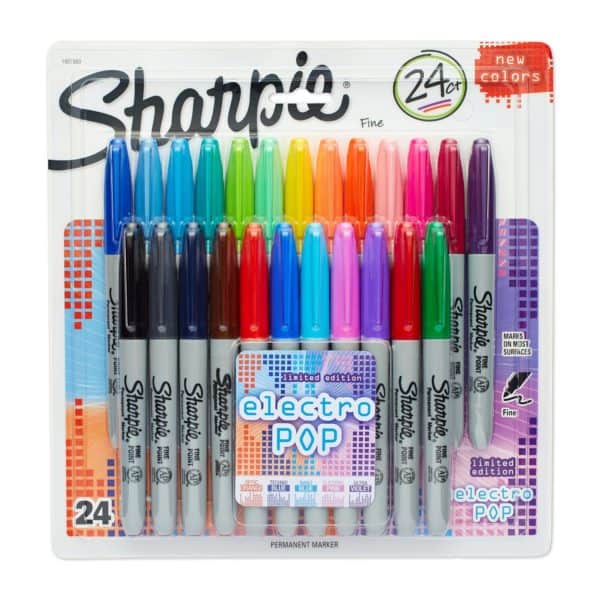 There’s a second reason that I’m a big fan of colorful Sharpie markers now, and it has nothing to do with how the autographs look.

As I mentioned, we brought along a handful of colors.  I’ll probably do more next time we go.  If we had a color that we thought would be particularly special to that character, we made sure to give them that color to use.  Not only did that make a nice touch for our autograph books, but many of the characters noticed and commented on it/gestured about it.  If they didn’t notice, sometimes we told them something like, “We picked a pink marker for you, since your dress is pink.”  That always got a a positive reaction.

Our very favorite reaction was from Tigger at the Crystal Palace restaurant.  We didn’t even need to point out to him that we had given him an orange marker.  He immediately started jumping around and wildly pantomiming to us.  When we couldn’t figure out what he was trying to tell us, he started to act like he was crying.

After some guessing, more gestures, and him making a smiley face in one of the kids’ books, we finally figured it out and blurted out, “You’re so happy that we gave you an orange marker to use that it made you cry?”  He excitedly pointed that that was right, and we all laughed and hugged.  Such a fun memory, and all just because we had an orange marker with us.

If you’ve been to Disney World or Disneyland, do you have any great autograph tips?

This post was originally published on Many Little Blessings (which is now Real Life at Home) on December 15, 2013. It was last updated in October 2016.

Disclosure: This post contains affiliate links. They don’t change the price you pay, and we may earn a small compensation after you purchase. Thanks!