You are here: Home / Memories / May We All Serve with Such Enthusiasm 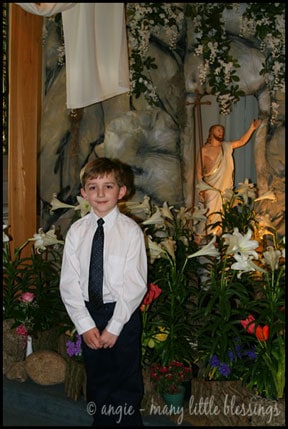 Jack at his First Communion

Last week, he completed server training.  I couldn’t be there while he did it, but heard from Eric that it had gone well, but that Jack wouldn’t stop asking questions.  Jack told us later, when Eric said the questions had been a bit much, “I’m sorry – I was just so excited!”  As soon as Jack saw me, he excitedly told me, “There’s a paper we need to drop off at church so they’ll put me on the schedule.  Can we do that soon?”

Then, as we got ready for Mass this weekend, Jack kept saying, “I hope they need altar servers!”  (If altar servers that are on the schedule don’t get there early, they start to make a general announcement asking for servers from the crowd.)  I have to admit, I was nervous.  Maybe even so nervous that I stalled the whole family a little in the van as we were getting ready to go in.

As we found an open pew, one of our priests walked in front of the congregation that was there early and I watched every muscle in Jack’s body tense.  He edged his bottom forward in the pew, and he was holding his breath.  Then, our priest asked for two Extraordinary Ministers of Holy Communion.

Jack took a breath finally and his shoulders dropped.  And, then, our priest said they also needed two more altar servers.  Jack almost gasped and his head shot to the right to look at me.  I have to be honest, I wanted to say no.  I wanted to say, “It’s too soon after training.”  Instead, I said, “Go ahead.  But you remind them it’s your very first time.”

Jack shot up and sprinted down the aisle to the sacristy (trying to make sure not to be beaten by any other possible servers).  Eric and I said extra prayers.  Soon, we saw Jack come out with the other servers.  Since they were both teenagers, he just looked tiny.  One of the servers (a young lady from a family very active in our parish) motioned him to go a certain direction, and I felt some security — I knew that meant she would be helping him.

The Mass went well, even with a missionary priest performing the Mass, which often can throw a curve ball to the servers.  (One of our priests was also there.)  There was only a couple of points when Jack started waving to us (and some friends).  I cringed and willed for him to stop.  We told him he wasn’t allowed to do that up there (after the fact) and he said he didn’t know that, but would be sure not to do it again.  Despite the waving, he did a great job.  Jack looked extra prayerful during many points, and I could tell that he felt so proud to be serving.  Sure, he had a few moments of uncertainty, but he had a wonderful guidance from that teenage girl.  (We actually went and spoke with her and her family to thank them afterward.)

Jack told us that he can’t wait to be an altar server again, and that he just knows he’ll do better each time he does it.  And, I know that as time goes on, I’ll probably breathe a little easier while he’s serving.

When I was able to get over my feeling of nervousness and anxiety, I realized something about the experience.  I looked back and thought about how badly Jack had wanted to be a server and for how long.  I remembered watching as his body tensed, his breathing stopped, and his eyes were full of hope as the priest came out in front of the congregation.  I thought: When was the last time I got that excited about something? When was the last time that I felt like I needed to sprint toward fulfilling a long term goal?  And, more so, when was the last time that I sat with a body fully energized and waiting so intently to serve God?

That we may all serve, work toward goals, and live with the same kind of enthusiasm as Jack.