Store bought cakes can get expensive and sometimes can lack the personality that a homemade cake can have.  Plus, it’s even more rewarding when people compliment the cake because you can just say, “Thank you!” rather than, “Yeah, the store did a great job on it.”  First Communion cakes are no exception to this.  There are so many options for making a cute, homemade First Communion cake, even if you feel like you’re challenged in the decorating arena.

If you’re a regular reader here at Many Little Blessings, you may remember that last year, I shared a chalice cake, two host cakes, and a set of cupcakes made to look like a bunch of grapes. 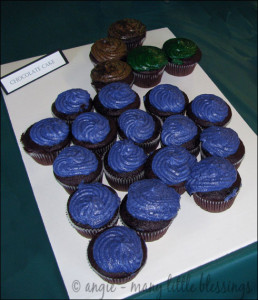 This year, I wanted to share the cakes that a friend made for her daughter this year, as well as some other great resources for homemade First Communion cakes. 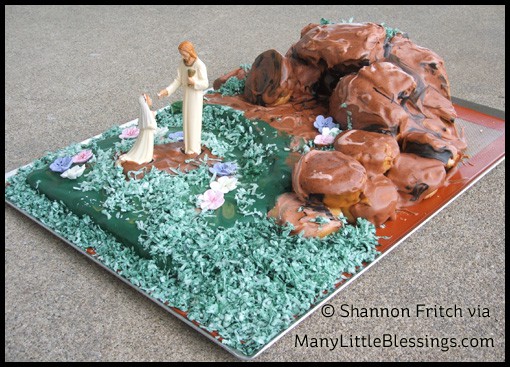 Isn’t this a beautiful and creative cake?  I saw it when she shared a picture on Facebook and knew that I wanted to be able to share it as well.  Shannon was gracious enough to allow me to do so.  (Thanks, Shannon!)

By the way – do you see the “pan” that the cake is on?  That’s a silpat from DeMarle at Home, and they are one of my most used kitchen items.  Love them!

I realize that if you are decorating challenged, this may seem like a big undertaking, but I think you’ll be surprised to see what the cake looked like before it was decorated and you might decide it is considerably more doable: 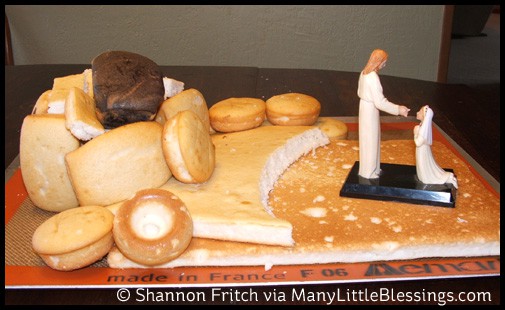 All of the pans that Shannon used are from DeMarle at Home.  However, you could use a variety of pans that you have in your own home to make a similar set up.  Shannon shared with me that she wish she had used food coloring in all of the smaller pieces, like she did with the mini loaf  at the top of the pile, as she would have been able to use less icing in her decorating.  The whole set up was made with three boxes of cake mix.

Shannon found her cake decoration of Jesus and the First Communion girl on Ebay.

If the tomb cake just seems too daunting (and you want a twist on what I shared last year), you could always consider something more along the lines of Shannon’s other cake that she shared a picture of with me: 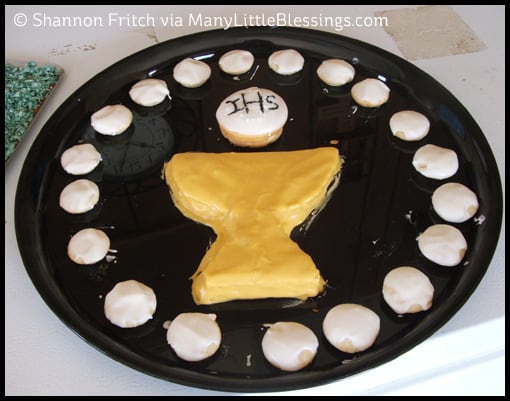 She just used some leftover cake from the tomb cake to make her chalice and then (I believe) a cupcake and then mini cupcakes in white as “hosts.”  Of course, the fun thing about this is that, other than the chalice portion, no cutting or serving is needed for people at the party.

(Several of those are affiliate links, which helps to keep us in school books – thanks!)

You might also want to check out my First Communion eBook Bundle: 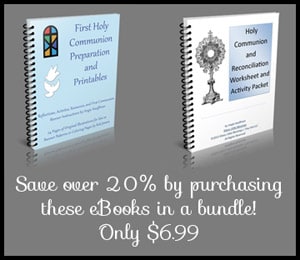 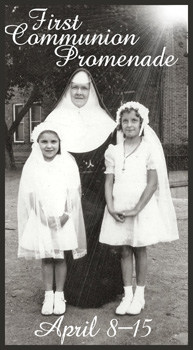 Be sure to check out some of the other topics for the week and visit any of the blogs to join in for the link up on the 15th:

April 15- First Communion Link Up, and you’re all invited!

This post contains a few affiliate links.  They don’t change the price you pay and using them helps support this site.  Bonus!

Previous Post: « Fine Motor Skill Fun with Sight Words
Next Post: 5 Things To Remember When One Child Excels But The Other Struggles »