You are here: Home / Products We Love / I Love a Set of 25 Year Old Markers 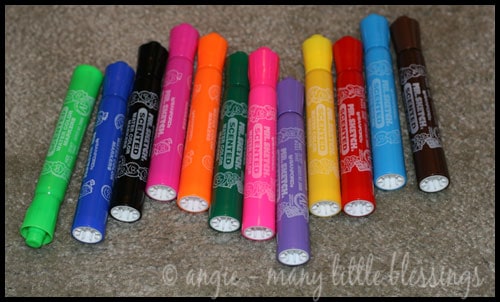 When I was eight years old, my life changed in all kinds of ways. My Mom got remarried.  My biological father gave up his parental rights and I was adopted by my Mom’s new husband (who has been a better Dad than I ever could imagined having).  I was moving eight hours away to a place I had been to once and was leaving behind everything I had ever known.

Of course, looking back now, I know that all of those changes were for the best.  The only thing that I can now look back on and wish it would have been different is that moving away meant that I only saw my Grandparents a couple of times a year instead of living on the other side of the duplex that they owned.

So, what does this have to do with markers?

Moving eight hours away, of course, meant that I was leaving my school that I had attended from kindergarten through 2nd grade.  I know that I must have been upset about that for a variety of reasons, but one thing that I recall telling my Mom I was disappointed about was that I was just sure my new school wouldn’t have the Mr. Sketch scented markers that I loved at my school.

Yeah, when you’re eight years old, these are the kinds of things that you think about.

My Mom, being the awesome Mom that she is, got me a set of the markers for Christmas. I loved those markers.  Loved them!  I used them.  I smelled them.  (The turquoise was/is my favorite scent.)  I left them in the styrofoam packaging so that they would last longer.  I made friends be careful if they wanted to use them.  I carefully packed them when we moved a few more times. 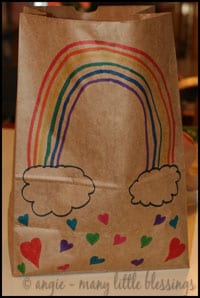 Well, that’s not entirely true.  I didn’t pack them for just a few more moves.  Not only did my family end up moving three more times, but Eric and I have moved seven times during our marriage.  And yes, those Mr. Sketch scented markers came with us.

It was a couple of weeks ago while I was coloring on our paper bag pinata for Molly’s birthday party and I was admiring the bright colors and yummy scents that I realized, “Hang on!  I’m coloring with 25 year old markers!  How in the world have these lasted for 25 years?”

I can’t promise that if you buy some now that they’ll last 25 years.  I took pretty good care of those markers, apparently.  I realized that it probably just goes to show you how carefully a child can take care of something when they know that it’s special.

So, yes, I love a set of 25 year old markers. They’re bright, they’re fun, they smell great, and they remind me of how much my Mom loves me.