If you have a garden, you probably have tomato plants. Maybe you don’t, but I think most people with gardens stick in at least a few tomato plants.

You know, because why not? They are prolific and easy to grow.

Because of having tomato plants, there are a variety of reasons for having green tomatoes (which really are just tomatoes that haven’t ripened yet). You might be picking off all the tomatoes that are left right at the end of the season (because they will continue to ripen indoors), you might be grabbing off the last of the tomatoes before disposing of a plant that has some issues, or you might be picking them just because you want some fried green tomatoes.

Whatever your reason — if you have some green tomatoes, it is so tasty to make some fried green tomatoes as a side dish for your next dinner. We love them, and we think they’re a fun way to use up some of the tomatoes from our garden.

Typically, a pound of tomatoes are going to be around two decent sized tomatoes.

So, go grab a pound of green tomatoes (or more if you are feeding a larger crowd).

You’re going to slice the tomatoes. I like a nice sharp knife (I used my bread knife because my favorite knife was in the dishwasher) to slice them.

Be careful not to make your slices too thick. (Doesn’t it figure that the slice you can best see the size of in this picture is the one that came out a little more thick than I wanted?) 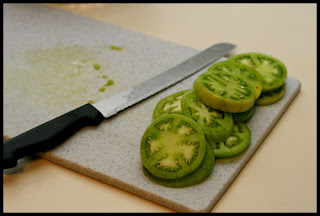 Set up three bowls. I like nice shallow bowls.

Put flour in the first bowl (around 1/2 cup), 2 eggs (beaten) in the second bowl, and then around 1/2 cup of cornmeal in the third bowl.

(On a side note, you can also use Jiffy Cornbread Muffin mix instead of cornmeal for a sweeter taste.)

Anyway, you’re going to cover the tomatoes (both sides) in each of the three bowls.

Here they are in the flour: 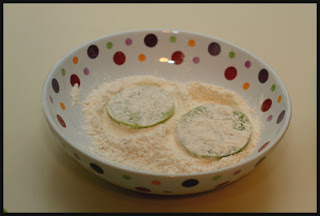 Here they are when all of them have gone through all three bowls. 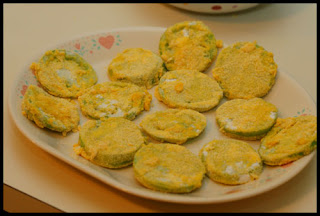 During step two, you should have been heating up a skillet with oil. I use canola oil because that’s what I have in my pantry.

You’ll want enough in the skillet that it will cover one side of the tomatoes at a time.

Once the oil is hot enough (so that when you put the tomato in, it sizzles), carefully put in all of the tomatoes (or at least all you can fit in).

You’ll cook each side for 2 – 3 minutes, and then take them out (to a plate with paper towel).

If you’re cooking more than one batch, be careful, since the oil will probably be hotter for the second set. I never keep the second set in as long as the first one (two minutes a side is probably plenty on a second set). 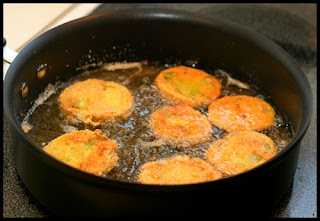 Serve immediately after they are done.

Okay, they could probably hold out a few minutes, but I wouldn’t wait a long time. When we had to wait (like this batch pictured, since the burgers weren’t done yet), we actually heated the oven to 170 degrees, and put them all in there to stay warm.

We like the fried green tomatoes served with fat free ranch dressing. 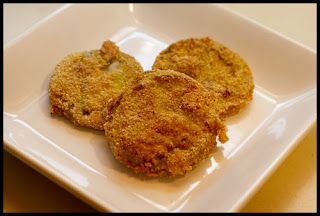 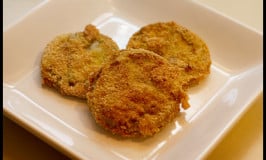 How to Make Fried Green Tomatoes

Angie Kauffman
Enjoy this perfect summertime fried side dish. It's perfect when you have an abundance of green tomatoes!
Print Recipe Pin Recipe
Course Side Dish
Cuisine American

If your tomatoes look like they're getting way too brown and crispy, make sure to turn down your heat. If they're taking longer than 3 minutes to look golden, turn up your heat a little.
Tried this recipe?Let us know how it was!