You are here: Home / Special Needs / How Our Autistic Son Finally Learned to Ride a Bike
358 shares

It’s as easy as riding a bike.

To our family, that was one of the dumbest sayings ever.  Riding a bike was as far from easy as was possible.  While Eric and I, of course, knew how to ride bikes, we had three kids who couldn’t ride two wheelers.

Finally, a couple of years ago, it clicked for both of the younger kids and they were off riding.  This left Noah, our son with high functioning Autism, still riding the large, three wheeled Schwinn that we had previously purchased for him.  While that was a blessing that he could ride with us, we could often see the defeated look in his eyes as he went up a hill and had to use all his might to manage to get that huge thing up the hill while the others went up on two wheels.

During one session of Googling about it one night, I found a national organization called iCan Shine which focuses on teaching people over eight years old who have special needs to ride two wheelers.  I gasped!  Could Noah really learn to ride?  How could this organization teach kids who have never learned?  I sat there with a mix of excitement and skepticism.

I found that the program would have a week long camp (75 minutes per day) about 90 minutes from our home.  It seemed too far away, but as soon as I told my Mom, she vowed that we would find a way to make this work.  I excitedly told Noah, and he wasn’t so sure because he was afraid.  I may have put some bribery into place.  We planned for our camp week after securing him a spot. 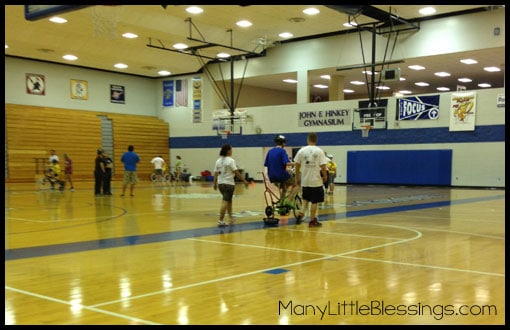 The First Days of Bike Camp

Right away, they had the kids on their special roller bikes, with a regular wheel in the front and a special roller in the back.  The kids all rode for just about 75 minutes straight, with extremely short breaks, each with two volunteers walking along side of them.  Only one child in the group got his volunteers running that first day.

This is where I admit something.  I watched Noah on that special roller bike, riding slowly, and I felt defeated.  Could he really learn to ride in just five days?

On the second day, I found out that one of the girls in his group was taking the camp for the second time.  As I watched Noah still slowly riding along, I had to try to calm myself.  We had talked about how amazing it would be to ride.  What would we do if he wasn’t riding at the end of the week?

The highlight of the second day was watching Noah ride a tandem bike with the bike technician.  (Tuesdays in the camp are called “Tandem Tuesday,” as each camper gets a chance to ride around several laps with someone.)  He loved to feel the speed of them riding around on the gymnasium.  I loved seeing it, but it also broke my heart a little.  He was just not progressing.

On Tuesday night, I was busily getting ready to go away to Savvy Blogging Summit, and sobbing.  How could I leave and not be there to comfort him on Friday when he wasn’t riding.  My heart was breaking.

I finally decided to go to Savvy anyway, and my Mom promised that she would be there to comfort him, if he needed it, as my parents had already planned to take him to the last three days of camp.

While I drove to Cincinnati, my Mom called me about half way through the camp session.

“He isn’t going to learn to ride this week, is he?” She sadly asked.  Now that she had seen him shakily riding on the roller bike, she understood my concern.

She shared with me that two of the kids in his group had been moved outside because they were now riding on two wheels as of that day.  I was glad for them, but sad for us.  We talked briefly, and then planned to talk later in the evening.

It seemed unreal.  Could this be true?

“They put him on a two wheeled bike and he has ridden four laps around the gym so far.”

I cried and cried.

She said they would be taking him outside to ride now as well.  He proceeded to then ride for around 20 minutes straight.

He got off his bike at the end of camp and told my parents, “I feel like I could take on the whole world now.”  I found that out while I was at dinner before the conference and could only wordlessly show the text from my Mom to Dana, who also got teary-eyed.  (I actually had a lot of other people at Savvy Blogging Summit who gave me hugs or even cried when they found out he was riding!)

Over the next two days of camp, Noah transitioned to the Trek bike that we got him that met the suggested guidelines of the organization.  And he rode and rode. 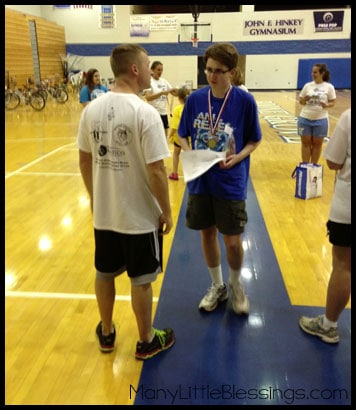 Noah, who has now been riding for about two and a half months, is the fastest bike rider in our family.  His success not only gave him the ability to ride a bike, but it also gave him a whole new confidence and independence.

God bless the people of the iCan Shine organization, as well as the camp that met in Valparaiso, IN.  You gave our family and our son a gift that we can never repay.  Thank you for making my son feel like he could take on the world.