You are here: Home / Family Life / Parenting / Hold the Vacuum 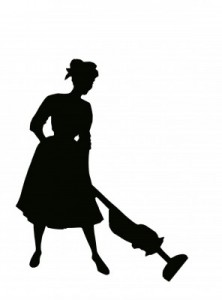 Having three boys under the age of ten means my house is never clean. I instead do what I call, “Creative Straightening”. We are fortunate enough to have a room in our house that is the playroom for the boys.  Most days I just shut the door.

However, the other day I was having people over and I wanted to give the impression that I keep my house cleaner than, well, I really do. All of a sudden I had the eyes of an eagle, I told my boys to go and clean up the playroom and to walk around the house and look to see if there were any Legos or toys on the floor. They needed to get them off my floor because the Dyson was going to come out shortly and if they didn’t care enough to pick up their toys and take care of them, then the vacuum would. It wouldn’t be the first time I had mercilessly sucked up forgotten plastic pieces to action figures and Lego sets. They knew I meant business.

The moment I said it, my mind flashed to a Youtube video I had seen years before. It is of Penn, of Penn & Teller, giving an opinion on an audience member giving him a copy of the New Testament knowing he is an atheist. Penn on gift of a Bible

Penn likened our belief in Christ’s second coming, to an impending collision with an eighteen-wheeler. He remarked that those who profess to be Christian but, do not proselytize, are really exhibiting a hate for their fellow man.  His candid thoughts have stuck with me.

In that moment, Penn’s truck was replaced by my vacuum. More importantly, there was a pull at my attitude. My son’s toys have little meaning to me. I don’t spend hours using my imagination to create new cities and worlds with them. If my sons have left them behind, why should I care to try and search them out and pick them up?

I always thought I was teaching a lesson of responsibility. Perhaps after losing a piece or two to the vacuum, my sons would begin to care enough to pick their toys and put them back where they could find them again.  Instead of taking action to seek out those lost pieces, I was content to suck them up, throw them away and place them with all the other discarded trash.

Now contrast that with my husband.  One of my sons comes to him after fighting over Lego light sabers.  He tells my husband that one light saber is missing so he and his brother are fighting over the one they can find.  My husband stops what he is doing and begins a grid search of the carpet.  On his hands and knees he is pounding the carpet to see if it will cause a piece of plastic, less than an inch long, to jump and be found.

After a good fifteen minutes, there was partial success.  The light saber was found but it was broken.  My sons expected a short trip to the kitchen trash can, instead they followed like ducks as my husband went to the kitchen “junk” drawer, got out the super glue and fixed the light saber.  He was rewarded with smiles and the gratitude of two sons.  I don’t believe my Dyson has ever brought about a change of heart or a smile.

I have tried to take my husband’s approach in the small sphere of influence my life may have.  I try to stop and do small acts of kindness where I can and be open, but not pushy, about the faith I believe in.  While I don’t know if I’d pick the image of an eighteen-wheeler or a vacuum for what will take place when we stand before God and his Son, I would like to know my life was filled with more “grid search” moments than “vacuum” moments.  So, as the Dyson made it’s way across my berber, I made sure to save any left behind pieces, and I said a prayer that my eyes might be trained to seek out and help those who may feel forgotten.

Sheree can be found writing at A Mother’s Epistle.

Previous Post: « How to Find Out How Much You Paid in Paypal Fees Last Year
Next Post: Top Ten FREE Online Phonics Resources for Preschool, Kindergarten and Beyond »