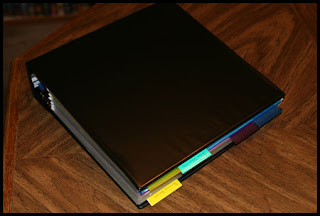 I have been using binders for a while to organize my recipes, but I have been using a few different binders. Last week, I finally decided to tackle a project that I had been thinking about — I put everything into one large binder together.

To start the process, with Eric, I went through all of the recipes that I had in the binders. We pulled out all of the recipes that we didn’t actually like, some that were duplicates, and then any that I pulled out of magazines (or the like) at some point because I thought we would try it, but we now know that we will just never try it. This step alone cleared out a lot of recipes. 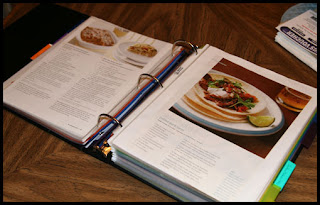 (On a green side note, any of those that were printed from the computer were cut in half, stapled at the top in a stack, and will be used as pads of scrap paper.)

I moved everything I had from 1 inch binders into a 2 inch binder (which is plenty big, especially after culling through the recipes). 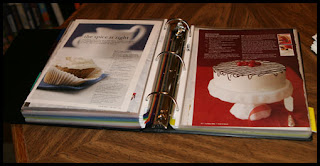 This time, however, I put all of the “to try” recipes that we kept in with the tried and true recipes. And, I also broke up the sections into what I thought would be more helpful for me. I could still break them down more, but I think what I have for now is broken down enough for my purpose.

On a side note, the “scanned recipes” is a section of color scans that I did of an old magnetic photo album that my Mom put together of all kinds of handwritten recipes from family and friends, as well as newspaper clippings, etc.

I just love having my recipes in binders, and it’s great to have them all in the same binder now!

Now…if I didn’t just have an entire bookshelf of cookbooks, I might be even more organized!

This post was submitted to the following memes: I am Blissfully Domestic, Talk About Tuesday, and Tackle It Tuesday.

Previous Post: « 10 Reasons to Rent a Condo for Your Next Vacation
Next Post: Question and Answer: The Snuggie »