One weekend in March, Eric was helping to put on a church retreat all weekend. So, it was just me and the kids, and we had big plans.

Well, if big plans means doing nothing and working on laundry, then we had big plans. Eric had asked the kids to please be good helpers for me while he was gone. So, when it came time to do laundry, they all eagerly wanted to assist. 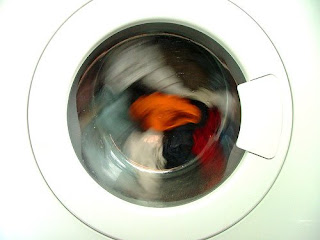 What really excited me was that after we got the laundry going, they shut the door to the laundry room and stayed in there for the entire load of laundry.

I had no idea what they were doing, but it just sounded like they were pretending and talking, so I enjoyed the quiet.

Upon the load ending, their chatter just piqued my interest too much, so I had to ask them what they had done that whole time. In response, I got a lot of shifty eyes.

Molly mentioned something about “Gigantapants.” (This is pronounced as if you have joined the words gigantic and pants.)

Both of the boys blushed.

Finally, I begged them to tell me. I promised not to laugh. I had to know how they had not only watched laundry going through the wash, but had a wonderful time doing it. And, apparently the promise of not laughing about it was enough. It also meant that I was about to get quite an earful about what they had been doing.

It seems that there were battles (a la Pokemon-style) between items of clothing as they spun around the washing machine. First, apparently, was Gigantapants (an adult pair of blue jeans) versus poor Pink Shirta (a demure 5T size shirt). Then, Red Diamond (a red shirt of mine with a couple of sparkles on it) versus Red Shirta (Noah’s polo shirt) came next. The big winner, however, was White Towela (aka a Shout Color Catcher).

This just reminds me once again about the wonderful creativity of childhood and their unique ability to occasionally forgo all of their store bought toys to find great fun in something more ordinary. I just pray that I can continue to foster their creativity and wonder as they grow.

Previous Post: « How to Make a First Communion Banner
Next Post: How Could It Have Been 17 Years Ago? »