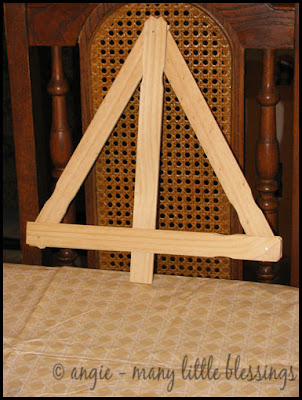 At the beginning of December, we went to Home Depot for one of their kid workshops.  We were very bummed that instead of getting to make a small wagon (like for stuffed animals), they said they had run out of kits more than an hour before the workshop was ending.

I thought about just leaving, but they gave an alternate craft to make.  I saw what their idea was — a Christmas tree out of five paint stirring sticks.  I’ll be honest here, that made me come pretty close to turning around and walking out.  But, we were there and I figured, “Well, why not?”

We used three small nails (should have used four though), a hammer, and five paint stirring sticks.  It’s probably hard to see, but there are actually two sticks running horizontally on the bottom, with all of the other sticks sandwiched in between them at the bottom.  This craft was super easy to make and very quick.  The cool thing was that we also got to decorate them at home (as a school art project).  Quite frankly, the craft would have been incomplete without what we did next. 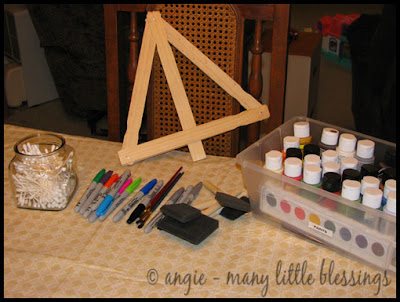 We got out our already assembled paint stick Christmas trees, craft paints, sponge brushes, cotton swabs, and Sharpie markers (which we didn’t end up using, except for to write the kids names and the date on the back of the trees). 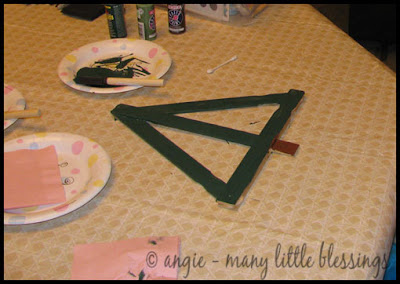 Each of the kids picked their own shade of green and painted the tree with the sponge brushes.  They also used brown paint to paint the small bit of tree stump at the bottom.  (I assisted with painting the edges for those that needed help.) 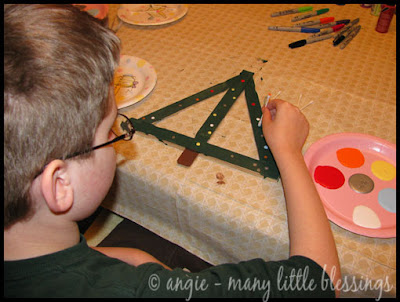 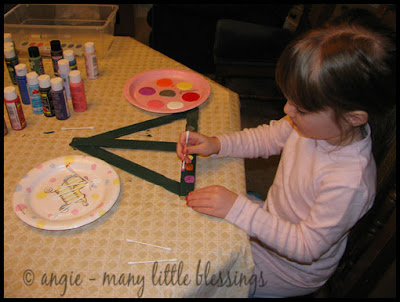 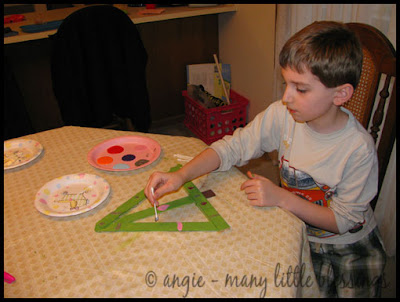 I let each of the kids pick five to seven different colors of paint and put them on their own personal paint trays (or leftover baby shower plates, if you want to be technical about it).  They then painted with cotton swabs.  It was fun to see that although I had a preconceived notion of how these would look, the kids each came up with their own designs. 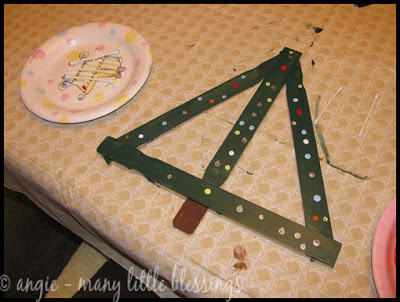 I just loved the way that these came out!  The kids had a fabulous time working on these, and I got a lesson in not being so quick to dismiss an alternative idea.  Who knew they would turn out so cute?  In the end, I was glad they ran out of wagons — these will be Christmas decorations we will cherish for a long time to come.