You are here: Home / Homeschool / Every Education Has Gaps and Other Truths I've Learned
697 shares

I’m sure that I’m like a lot of other homeschoolers in that I can’t help myself but to worry about what we’re covering and, more importantly, what we’re not covering each year.  I don’t have a school board or state board of education telling me what I should and shouldn’t do in my lesson plans.  Instead, I’m piecing together an education the best that I can, and there’s a lot of pressure that comes with that.

Here’s the thing that I had to finally realize – every education has gaps.  From the most prestigious private institutions to the most low income inner city schools, all of the students are learning some things and not learning other things.

So, whether your children will be headed off tomorrow morning to a public school or a private school or just down the stairs to your dining room table, here are some things to ponder that I’ve seen to be truths in my life about education.  I hope that, if you worry about your child’s education (especially if you’re a sometimes anxious homeschooler like me), that these might be thoughts to give you a little peace.

Every Education Has Gaps and Other Truths I’ve Learned

1. There will always be things to learn.

Just tonight before writing this, I was mesmerized by a show on the Smithsonian channel about the 1914 – 1917 Trans-Antarctic expedition of Ernest Shackleton and his crew.  This was something I had never heard of in school or for any other reason prior to tonight, and I was astounded and inspired.  So, whether it’s from a documentary you happen to flip by on the television or an afternoon walk around your neighborhood, learning can come from unexpected places.

3. It’s more important to learn how to learn.

You know that wise old saying about giving a man a fish versus teaching a man how to fish?  It’s a wise old saying for a reason.  It’s a longer lasting skill to teach someone how to seek out answers, how to explore ideas, and how to form their own thoughts and opinions than it is to simply teach them facts.  An education where someone learns how to go seek out more knowledge isn’t going to suffer as much from gaps as an education that focuses on sets of facts. 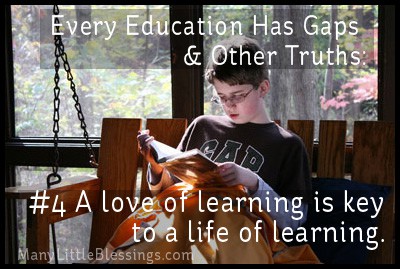 If you can foster a love of learning in your children, they’ll spend the rest of their lives wanting to learn and seeking out new concepts, skills, and ideas.  Here’s the thing – a love of learning is a hard thing to teach.  It’s just not something you can force onto someone.  One of the best things that you can do to help it along though is to show them your own excitement in learning.  Show them your failures when you try to learn something new, but that you still try again because you want to learn it, not because you have to learn it.

What I said in #3 is true with #4.  If they have a love of learning, those gaps now won’t be as important because they’ll fill them in later.  Or, you know what?  They might not fill them in later.  I never took calculus and I’m probably never going to learn it.  It’s not a big deal.  It’s a gap that can stay wide open for me, and it will probably never matter.  Some gaps are like that.

I was shocked to find out that, when in high school, my Mom only read a couple of novels in English class each year.  I, on the other hand, read more novels in just my freshman English class than she might have done in all of her English classes.  (I took Honors English throughout high school, including the AP level my senior year.  We almost constantly went from one novel or play or anthology to another.)

Here’s the thing that I learned once my shock wore off.  Even though she finished high school almost thirty years before I did, she seems to have a better recollection of the books she read for her English classes than I do of mine.  Sure, I have a few books that stuck with me because I really enjoyed them, but the majority are vague memories.  I kind of wish, in retrospect, that there had been a focus on spending quality time with less books than cranking through quite so many of the classics over those four years.

Oh, I did learn one thing from the experience, actually.  I went from a middle school student who loved to read to a high schooler, then college student, then adult who never really read for pleasure the same way that she did when she was younger. 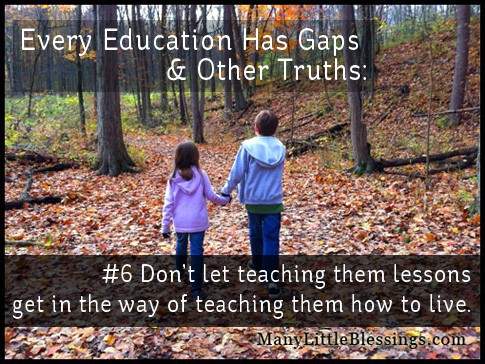 I would venture a guess that an awful lot of the most important things that you’ve learned in your life weren’t learned in a textbook or in a classroom.  Don’t get so caught up in trying to give your children an education that you forget to teach them about life and the things that make living so amazing.

I’m stopping myself from giving examples on this one because the things that make living feel amazing to me aren’t necessarily going to be the same as yours.  And yours aren’t going to be the same as your kids’ things.  But, if you embrace yours, they’ll learn how to embrace theirs.  And, along the way, you may find that you embrace many of the same things.  Those are some of my favorite moments as a parent.

7. A great education doesn’t equal a successful life, and the opposite is also true.

I have sometimes caused myself a lot of anxiety over fears that my kids aren’t smart enough.  I know that sounds horrible, but it’s true.  I spent my life skating through school because it was easy for me (usually).  I typically scored above my grade level in standardized tests and graduated in the top ten percent in my class.  I worry because my kids don’t score like that.

A short discussion between one of my nephews and his youngest sister a few months ago made me finally breathe a sigh of relief because I was reminded that every advanced class in the world doesn’t guarantee that the person will come out on the other side with a great job, big house, and enough money to be comfortable.  And, being an average scoring student doesn’t mean that something exceptional doesn’t await them later in life. 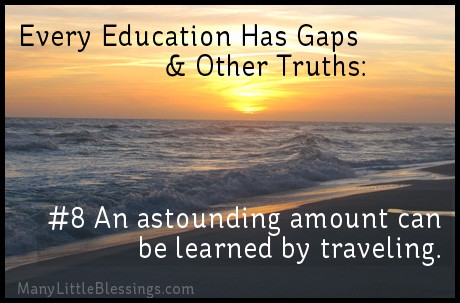 8.  An astounding amount can be learned by traveling.

If you have the means to travel, do it.  We spent years and years not traveling.  But, now we take more frequent trips.  Some are as low key as a weekend of camping and others are bigger like that month we spent in Florida.  I have been amazed at the things that can be learned by going to new places and having new experiences.

Make a list of travel experiences that your family would like to have, and try to do them (even if it takes years).  Make some of them easily attainable and others wildly unattainable, even if it means that they never get crossed off. 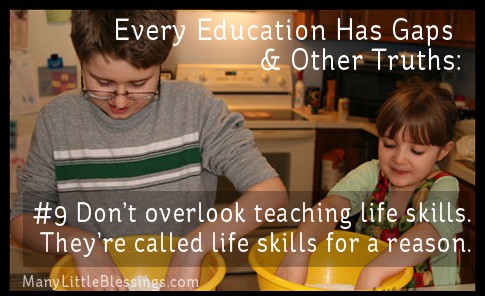 That’s right.  They’re called life skills because you need them throughout pretty much your entire life.  I wrote a whole eBook about just some of the life skills that I think are important because I managed to have a huge gap in my education where they were concerned.  Seriously.  It was a big gap, and I was kind of a mess because of it when I left home.  Some gaps are going to happen, but try to make this one a little less huge than others might be.

I went to a preschool in a Catholic church, then kindergarten through 12th grade in public schools (as a high performing student throughout that time), and then two degrees from a Big Ten university.  There are so many things that I didn’t learn, and so many things that I did learn that I just don’t remember anymore.  As far as I’m concerned, that’s okay.

I don’t know where you went to school or how long you went, but I think it’s safe to guess that there were gaps in your education or there were things you learned that you don’t remember now too.  I would venture a guess that you’re okay with it too.

No matter what kind of education you are providing for your child (whether it’s in your home or you feel like you need to mortgage your home to pay for some fancy education or somewhere in between those), there will be gaps in what they are learning.  And, sometimes there will be things they do learn, but then forget.

And do you know what?  They’re probably going to be okay too.

Previous Post: « The Night My Teaching Career Ended: The Job that Ended it All
Next Post: Learning Games with Dice »