We recently went all out for the boys’ birthdays and had their birthday party at Chuck E. Cheese. This is, of course, not keeping in with our trying to be a bit more frugal. But, we decided that since they rarely have a birthday party (especially one with friends), and since we were able to have them both be “the birthday boy” (they allow this for only about $5 extra), we thought it would be a special treat.

Speaking of treats though, knowing that we were spending so much on the actual party, I couldn’t imagine spending another $20 (or more) for either a cake from the store or multiple Chuck E. Cheese cakes to feed all 12 kids that were at the party.

So, knowing that I had all I needed to make cupcakes at home (I did have to buy more cupcake liners), I asked the boys what they thought of that. Not only did they agree, but they were thrilled! (Jack said, “I love that frosting you make, Mom.”)

But, there’s a problem. I can’t decorate cakes and cupcakes. I’m such a flunkie in that department. So, I went with an easy but fun decoration — spin art (or tie dye) cupcakes. Here’s what I did:

(Oh, quick note: Don’t pay too close of attention to the cupcakes. I didn’t take all of the pictures, so this is a combination of two different cupcakes.)

First, obviously, I frosted the cupcakes. I’ll have to share my favorite vanilla frosting recipe soon! 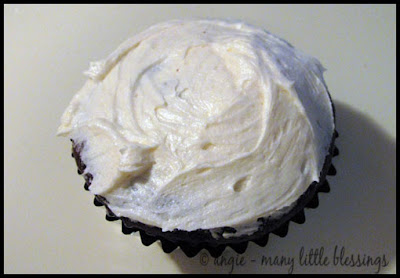 Second, I took out all the gel icing tubes that I had from when we made a cake with the Olympic rings last summer.

Each time, I drew three rings on the cupcake, and then one dot of gel icing in the middle. This doesn’t have to be perfect. (Especially when, like me, you’re making 18 – 24 cupcakes.) 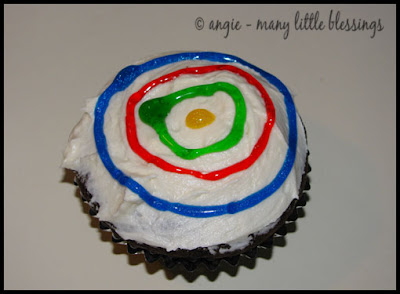 Now, grab a toothpick. Start at the center dot, and then drag the toothpick from the middle to the outside in a straight line. 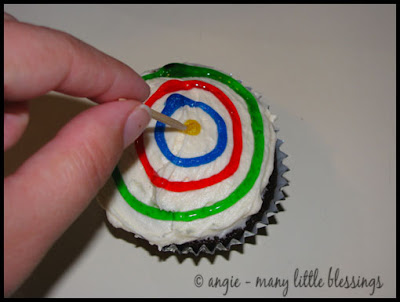 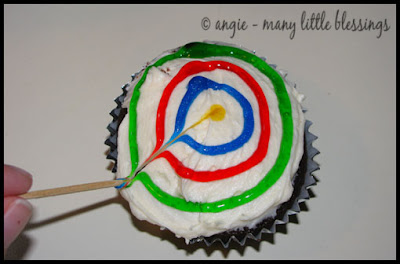 Continue around the cupcake as often as you like. I think I typically did it around nine times. But, I didn’t count, I just did it every so often.
This is what you’ll end up with: 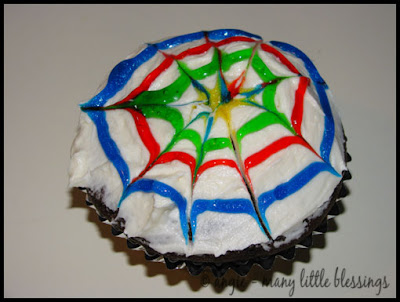 There is some color mixing in the middle because I only lightly wiped off the toothpick every so often. I kind of liked the mixed color. For a cleaner design, wipe off the toothpick often.
Also, as an alternate to the colored option, if you are having a Halloween party or maybe studying spiders, you could do all the circles in black, and then maybe even top the cupcake with a plastic spider ring.
Here is my finished product (or at least one pan of them): 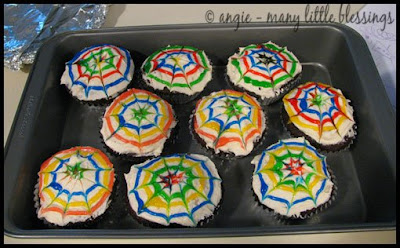 Everyone enjoyed their cupcakes, and we even got many compliments on the simple designs. So, not only was I thrilled to save a little money on what was already an expensive party, but, as a side benefit, we didn’t have to try to cut a cake while at the party. We just gave each kiddo one of the cupcakes, and didn’t have to bother with the mess that sometimes happens during cake cutting.