You are here: Home / Memories / Being a Yes Mom

Are you a No Mom? Do you find yourself saying no to your kids requests and ideas far more than you say yes?  Are you often telling the kids why a particular idea won’t work, without giving them the chance to try it out for themselves?

Know what?  I’m that Mom sometimes, and I don’t like it. I don’t mind if I have to tell the kids no because the answer has to be no.  But I find that sometimes it’s a no just because a yes is inconvenient or I think I know better.  That’s when I don’t like it when I look back at it later.

A few weeks ago, when almost everyone in the country was getting snow, we got snow too.  We thought we were going to get nice fluffy snow.  What we got instead was about six inches thick of hard packed sleet, and then a few inches of nice, light snow.

After a snowplow finally went through our neighborhood, the end of our driveway was impossible to pass, so the kids and I worked on it for 90 minutes (even though they actually only works 45 minutes of that).  During some of the other time, they decided to run around.  (They were amazed to be able to walk on the snow without sinking.)  I heard them talking that they should have a snowball fight.

“No!” I shouted across the yard.  This was an okay no.  I explained to the kids that the “snow” was solid packed with ice.  I asked how they thought it might feel to get hit with that.  I did get to be a Yes Mom, however, as I told them to throw these pseudo-snowballs at the side of the house.

Then, the boys got cold and went inside.  Molly said she wanted to build a snowman.  I told her she couldn’t make a snowman. This was definitely not snowman kind of snow.  She was disappointed, but assured me that she was positive she could make her very first snowman in all of this snow.  Again, I told her it just wasn’t the kind of snow to make a snowman — this was practically ice.  There would be no making round snowman parts.

Undeterred, she told me that it was okay with her if her snowman didn’t have round parts.  She thought she could build him from what we had in the yard.  “Okay,” I said with an air of encouragement.  It felt good to say yes.

Molly then put together several flat-ish slabs of this snow packed with ice.  She then found small pieces of ice to use for eyes and a mouth.  I told her she could run in the house to get a carrot, but I wasn’t sure how she could attach it.  Again, she wasn’t concerned about the snowman fitting into some preconceived notion of what a snowman should look like. “It’s okay — I can just lay the carrot down!” as she went running into the house.

She was so proud of her very first snowman! We had to take pictures (with a camera, as well as to send out via text message).  She asked the boys to come back out to see it.  She was thrilled.  And I was thrilled that she convinced me that she really could make her snowman afterall, so that I could be a Yes Mom to the little girl with a beaming smile. 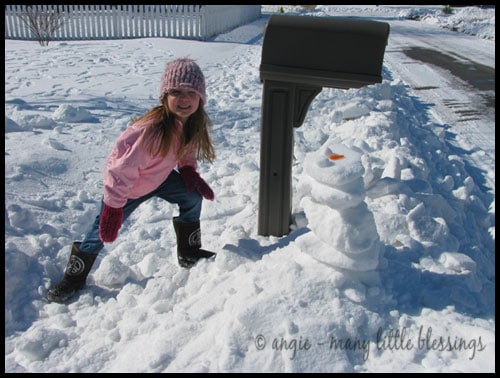 This post is linked to Works for Me Wednesday and Finer Things Friday.

Previous Post: « The Underground Railroad for all ages
Next Post: Curriculum Review: First Language Lessons for the Well-Trained Mind »