You are here: Home / Projects / DIY and Projects / A Small Craft Room Makeover with an Even Smaller Budget
5.9K shares

Yesterday, I posted about going from deciding to straighten up my craft room for our Spring Spruce Up to making a plan for an actual room makeover.  I shared with you the planning process that we took, and then also shared what it looked like when we took everything out of the craft room.  (In interest of full disclosure, let me just say that when I saw “we took everything out of the craft room,” that actually means, “It was a Saturday morning and I slept in.  Eric cleared the entire room himself while I was blissfully unaware.”)

In case you missed what it looked like in the playroom with all of the supplies in there, here it is again: 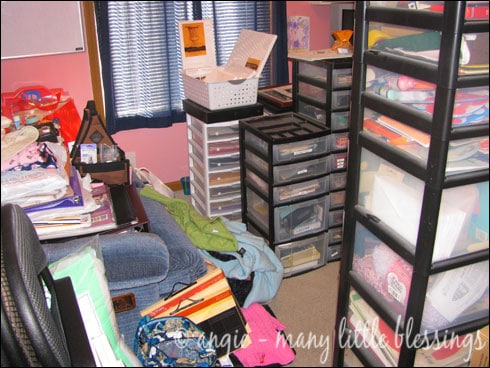 All of my craft supplies in the playroom

I talked about our planning process yesterday.  Today, however, let me share with you some of what we actually decided.

1. Instead of searching for another desk that might work better, we would look for a counter top to use instead. (None of the counter tops were the right size, however, as we were looking for something around seven feet long.  Most counter tops that were in stock were either six or eight feet.  I was surprised that most were under $50 though.)  Instead of a counter top, we opted for a shelf that was eight feet long (but Eric would be able to cut down) and 23 inches deep.  It cost $15.99.  (Much more economical than a new desk!)

We also had to purchase brackets to support this shelf.  Because of the nature of what they were holding, we had to go with more expensive brackets.  Still, we probably spent only around $20-ish on brackets.

On a funny note: Eric said one set of brackets were “thousand pound brackets” (meaning a set could support a thousand pounds).  Molly scrunched up her forehead, walked to the brackets, and then picked one up.  She then looked at Eric with some disgust and said, “Dad – these do NOT weigh a thousand pounds.”

2. We decided that all of the shelving would be best on only one long wall, instead of making an L-shape (just like the old desk). Doing this would allow us to change the layout of the room, and it would also save money because we would mostly just use existing shelving in a new spot.  (One exception to the shelf idea was the very top shelf.  It would now run the entire long wall, as well as a bit on the shorter wall.)

3. We would add one section of shelving to the highest shelf. This was purchased (with brackets) for under $10.

4. We would stack all of the drawers in one area (and really high).

5. I would get a new desk chair. I was determined that this would not cost a fortune, even though I know that the last time I sent Eric to the store for a new desk chair, he brought home one that was either $80 or $130, depending on which of us you ask.  (Oddly, he thought he spent more, and I thought less.)

Our Plan in Action 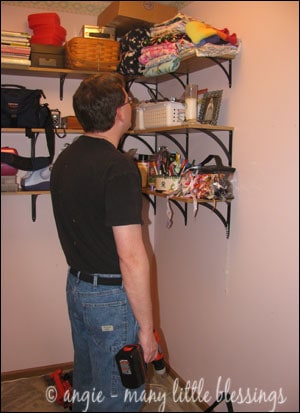 Here, everything was out of the room (except some of the shelf items).  This is what the shelves looked like prior to the work beginning.  Eric had already worked very hard at this point, clearing out the room and taking apart the L-shaped desk to get it out of the room.

We went to church, dinner, and a trip to the hardware store (for some more screws and such), so we had to leave the project for the next day. 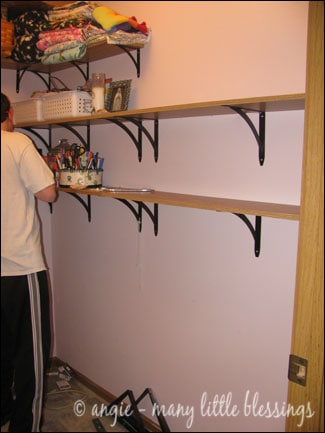 The process of moving shelving from both walls onto just one wall had begun.  Although it’s not finished, some of the shelves now reach from one end of a long wall to the other end.  Yeah! 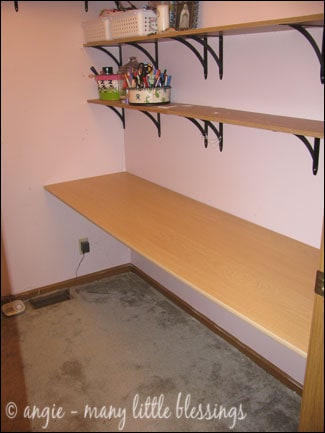 My new shelf-turned-desk has been installed.  To test it, Eric even sat on it.  (I’m glad I wasn’t there right then.)  Look at all that amazing space (and at such a great price)! 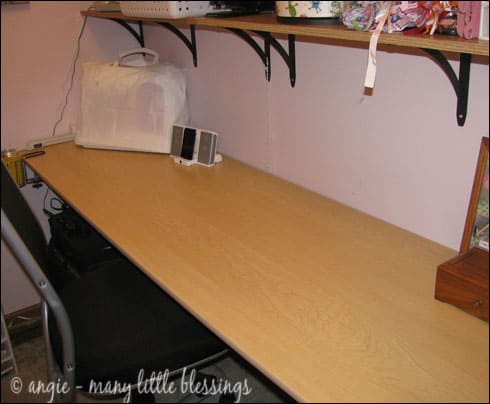 This is actually the desk (or at least part of it) after everything moved back in.  (This isn’t the final chair, however.  It’s my computer desk chair.) 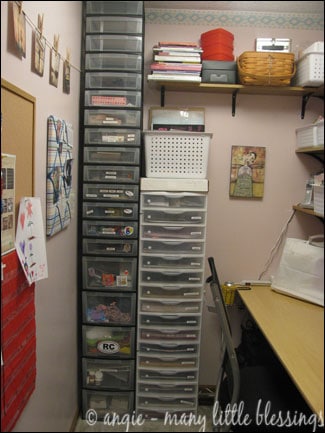 I looked through everything as I brought things back into the craft room.  I took a box of things to Goodwill, gave one of my sisters some things (like the desk and seven of the black drawers), and then also made a small pile of things to sell.

We were able to consolidate into just one really tall stack of black drawers (plus you may notice that the top five drawers are empty right now!) and then a stack of white ones for paper.  (I know in the old pictures, there were no white drawers.  Those were older pictures, so the white drawers were actually already in the craft room prior to the makeover.  They were in two stacks under the desk though.  They were originally purchased to use as workboxes for the kids.)

(Here are the black drawers that I use.  I bought them all quite a long time ago, and only when they were on sale.  The white drawers are these ones or must be very similar.  I must have stumbled upon an older type, as I got them on clearance.) 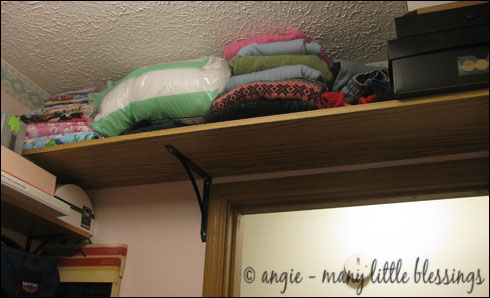 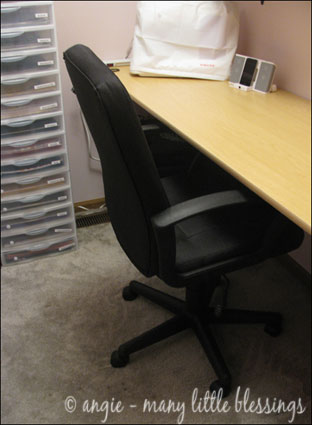 This is my new chair.  I am so thrilled to not be using a folding chair to do crafting!  We shopped at Staples for the chair, and I was shocked at how expensive they were.  After Eric tried to convince me to spend $230 on a chair, I pretty much was going to suggest we leave.  However, then I ran into this chair.  (Not literally.)  Although it did end up being our single biggest expenditure for this project, it was on sale, so I was happy for that.  We paid $40 (and it is really comfy!), and it was originally $90.

I hope that some of our uses of space give you some ideas for how you can use the space that you have! We don’t have a very big house, so we’ve tried to find as many ways as possible to use what space we have.  I like to think of the craft room as an example of Eric’s ingenuity.

Tomorrow, we’ll look at how I’m storing materials. And then on Thursday, it’s going to be your turn to share some sprucing up you’ve done in your house this week!  (Don’t get overwhelmed and think it has to be something huge — it doesn’t.  But, also keep in mind that from planning until finish on this project, it was less than 48 hours!) 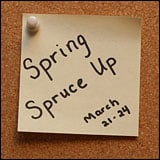 Be sure to check out all of the great ideas from some of my favorite bloggers for sprucing up around your house this week (and be ready, because on Thursday, we’ll have a link up so you can post about your own Spruce Up project):

This post is linked to Works for Me Wednesday and Frugal Friday.

Previous Post: « Spruce Up Your Craft Area: Recognizing When Your Space is Wrong
Next Post: Tips for Storing Your Craft Supplies »