You are here: Home / Family Life / Family Time / A Slithering Visitor in Our Porch

Yesterday, as Molly was getting ready to go to the backyard, she stopped at the door to our screened in porch.

“Yes?” I answered, while doing dishes.

“What’s that slithering thing on the porch?”

Let me tell you that while my next step was to casually say, “I’ll be there in a second,” as I dried off my hands, in my head, it was more like this, “ONLY ONE THING I KNOW SLITHERS!”  This was followed in my head by, “There is no way there is a snake in my porch.  There just isn’t.  It’s not a snake, and there is no reason to get worked up.”

“Ummm….Mom,” Molly continued, “Do you think you can come here quicker?”

Now, this is where I must preempt to say that I realize some of you reading probably see snakes often where you live.  I do not live in that kind of place.  In fact, I have only ever seen snakes in zoos and as a couple of people’s pets.  I have never seen a snake just out in the world doing it’s slithery snake business.

Well, you know, until I got to the porch door, that is. 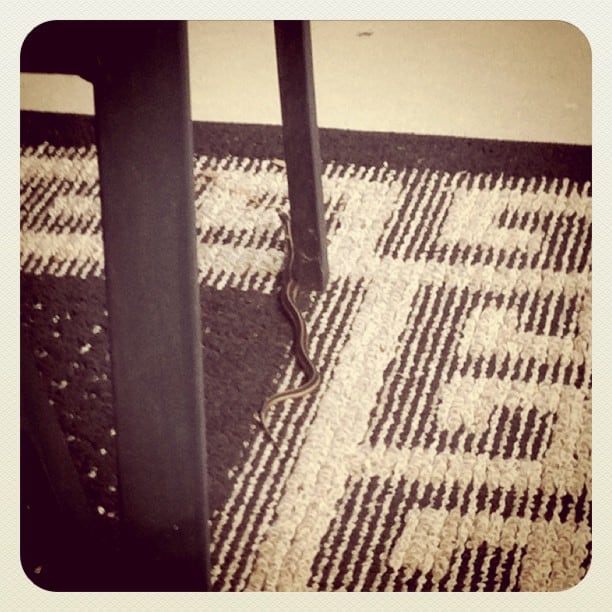 Molly looked up at me.  Instead of screaming like I expected I might, I was just amazed.  “It’s a snake,” I said, confirming what I knew she had already known.

We watched as it slithered on by.  Then, when it was farther away, we went onto the porch, and watched it slithering and looking all around, until it found somewhere to escape.  Though, in all honesty, this may mean that he found himself trapped inside the walls of my porch.  But, I’m fairly confident that he would find a spot to get back out into the world.

We then had to gleefully call Eric to tell him of our new “almost pet,” before telling him all about our snake adventure.  In fact, we had to tell everyone we saw for about 24 hours.

Not only was the whole experience kind of interesting, but I love now that instead of us all freaking out (like I would have expected), we used it as a cool learning experience instead.