You are here: Home / Family Life / Marriage / A Reflection on our First Home: 504 Square Feet of Young Married Life 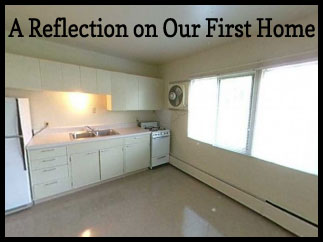 I sometimes look at our house, usually while trying to add one more thing to the already cramped space (it’s not a large house), and I declare that I would really love to move to a bigger house.  Financially, it would be difficult for us, and quite frankly, the idea of trying to sell a house (something we’ve never had to do) doesn’t appeal to me.  Plus, we like our neighbors and neighborhood.  So, we stay put.

Still, in those times, I sometimes can’t help but think of where we started out our married life.  At 19 and 20, we began our new life together with an apartment that was 504 square feet.  From the front door, you could see the entire apartment by just turning your head from one way to the other, except for the bathroom.

I was in college at the time (and I can’t remember if this was a time when Eric was in college or not, as he had a cantankerous on again, off again relationship with college), so this cozy apartment was our home of choice because it was our university’s answer to family housing.  The floors were large, industrial-style tiles that were always cold, with no carpeting anywhere in the place.  I don’t know about what the walls were made of, but I’m sure there was probably sometimes like cinder blocks or concrete underneath the cold exterior. 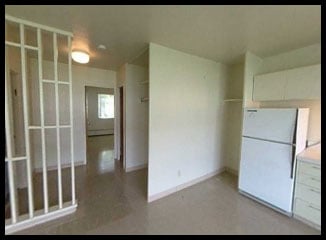 We had two rooms in the apartment.  One was the living room/dining room/kitchen/office.

You were in the kitchen when you were all the way up against a wall that was full of cabinets (that had to be used for dishes, pans, your pantry, and anything else you wanted in the kitchen).  Also tell tale of your kitchen location was the tiny gas stove, which was actually so small that we were unable to use at least one of the pans we received as a wedding gift, as its large size spanned almost (but not quite) two of our burners.  And, then one of my biggest kitchen adjustments was no garbage disposal.  (Eric thought this was normal, whereas I was flummoxed by it.)

Just a step away was our dining room, with the farm-style table with four chairs (purchased at Service Merchandise and given to us as a wedding present from my parents) stuck all the way against a wall.

Walking across the room the other way found you in our office area denoted by the desk shoved against the opposite wall, which eventually included a Packard Bell computer (our first computer) that was broken more often than it seemed to work.  (After paying almost $100 one time to ship it to an authorized place to fix it, we just started driving it the two hour round trip drive instead.)  Luckily, we eventually heard of this company that just seemed to be gaining popularity called Dell (you might have heard of them), and ordered a computer (which seemed crazy) instead of walking into a store to just buy one.

Just steps away was the coziest place in the apartment – our living room.  This was clearly denoted by the 6 foot by 9 foot carpet that we had near the television, end tables, loveseat, and recliner (which would stretch about half way to the television when reclined).  The recliner and loveseat were both purchased at a furniture consignment store, while pretty much everything else was hand-me-downs.

On the way to the bedroom was a spot for storage which held a variety of items, including our bikes.  Yes, that’s right – we just stuck our bikes right in the apartment rather than risk them being taken outside. 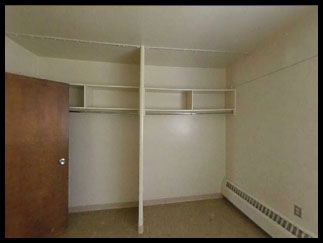 Our bedroom had large “closets,” but no doors (which was the way the former military housing was made).  We each had our own side and each a dresser of our own.  Our favorite feature of the bedroom (which had windows that anyone could look in as they walked into the apartment building) was how dark it was.  Because we didn’t want people looking into our bedroom, Eric made us the kind of curtains that only college students make.  He made us what seemed like black out curtains with a dark navy bed sheet and creative use of a stapler.

The apartment’s only bathroom was connected to our bedroom.  This meant that anyone coming over always had to traipse through our bedroom when they needed to use the restroom.  At least it was an excuse to keep the bedroom clean.  (Though, with just a closet, bed, and two small night stands, there wasn’t much to mess up.)

Other features of that first home:

So, here we are.  There are almost a thousand words here that mostly seem disparaging of that first apartment.  But, of course, that’s not the whole story.  The whole story is that we loved that place.  We loved that it was our own home.  We loved that we were beginning our life together there.  We learned to laugh about the click-clack of high heels above our heads, look forward to a night of Chinese food and laundry, and warm our feet on our 54 square feet of carpeting.

It was 504 square feet of love, of learning how to be a husband and a wife, and of anticipation for what the future held for us.  It was a lesson to look back on and realize that the amount of space in our home matters far less than the living that goes on inside of it.