You are here: Home / Uncategorized / 10 Quirky Facts about Me

Are you following my blog with Bloglovin, Facebook, or via an RSS Feed Reader or by Email? If not, please consider doing so! Thanks! 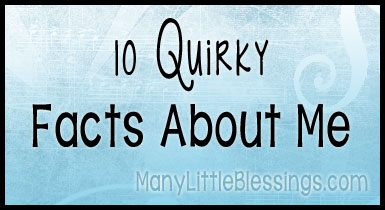 With family being in town last week, I put together a quick Top Ten Tuesday with the help of my 15 year old nephew.  That means that I missed last week’s 10 in 10 theme (from iHomeschool Network) of 10 Things You Should Know about Me.  I decided it would be fun to do that theme this week and share some quirky things about me.

Now, just know that I’m using quirky in a pretty relative way.  As far as I’m concerned, everyone is quirky in different ways.  That’s the beauty of us all being individuals.  But, it was the best adjective I could come up with to put this list together.

10 Quirky Facts about Me

2. When I begin eating a meal, I pretty much never start by taking a bite of the entree.  I had never noticed that, but it came up once and Eric said that’s always how I eat.  Once I was aware of it, I realized he was right.

3. If I could, I would stay up very late every night and sleep in very late every day.  (Years ago, I found this link about delayed sleep phase disorder, and that pretty much seems to sum it up for me.)

4. I like to arrange my eggs in the carton so that the weight in the carton is balanced.  When I shared this before (in the linked post), I found out there is a whole secret society, per se, of egg arrangers.

5. I like to have at least three pillows to use while I’m sleeping.  Ideally, I’d love to have four, but that doesn’t seem very nice, because I would stick that one in between Eric and I.  So, I skip that one unless I’m taking a nap or I’m staying somewhere and he’s not with me.  (I like a cocoon-type of method for sleeping.)

6. I prefer to have some type of noise all the time, like music, television, a fan, whatever.

7. If I’m not paying attention, I’ll all of the sudden notice that I have my head tilted way too far to one side while I’m working on the computer or watching television.

8. I sometimes get on the computer to do a task and then forget what I’m doing while simultaneously getting stuck in the Facebook-Twitter-Pinterest Bermuda Triangle.  (Sadly, I suspect I’m not unique in this problem.)

9. I have a very particular set of things I do at night before bed, and if I don’t do them right, I have to do them again.  This led to one interaction where a sister spending the night asked me if the lock on the front door was broken because she kept hearing me mess with it.  I matter-0f-factly told her, “No, I just have to touch the lock and knob three times.”

Yes, I realize that sounds a touch OCD.  That’s really one of the few things I do like that though.

10. I hate calling people.  Well, it’s not so much hate as it is that it makes me anxious.  I’m fine to talk on the phone, as well as to have people call me.  I just don’t like actually calling people.