You are here: Home / Holidays / St. Patrick's Day / 10 Notes on Our Visit from Seamus the Leprechaun
157 shares

The kids were already talking about being excited for next St. Patrick’s Day by mid-morning of March 17th.  Seamus was definitely a hit this year again! 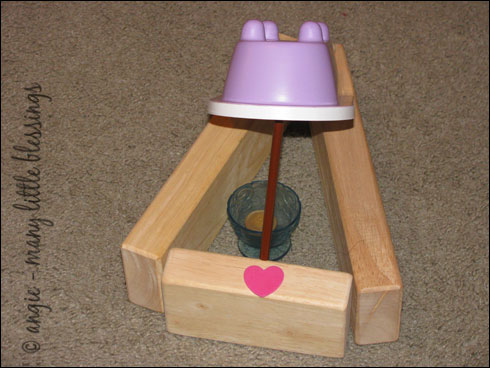 The children set up a trap to catch Seamus.  They put in a golden coin to try to trick Seamus to come in, hoping he would accidentally knock into the pencil on the way in.   Molly said the heart was there so he would be tricked into thinking that they were welcoming him in.

(Little known fact: The children couldn’t quit arguing during the construction, yet they refused to each build their own trap.) 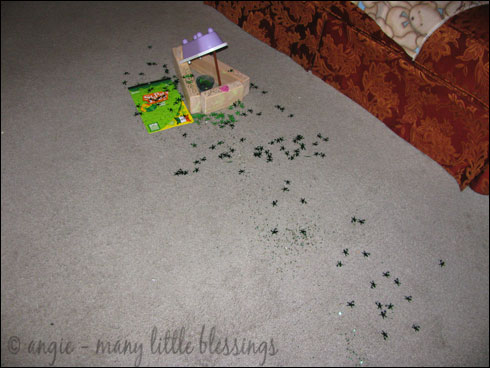 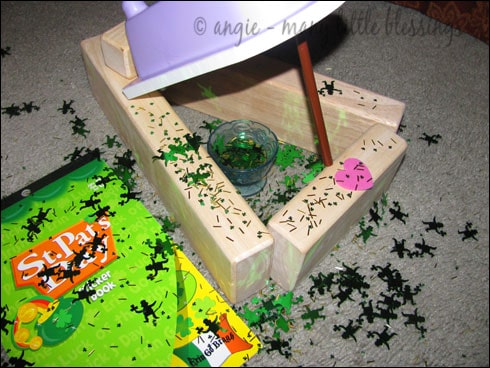 The children not only caught one leprechaun, they ended up catching tons of them.  Of course, they were all small and shiny.

(This was quite a mess on the floor.  Seamus wasn’t a bit concerned about how we were going to pick these up, apparently.) 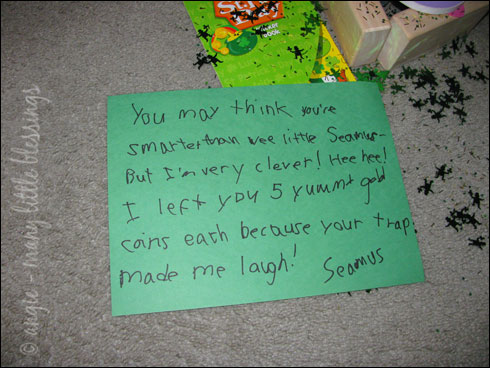 Seamus also left the children a note.  He let them know that maybe their trap wasn’t so clever after all. 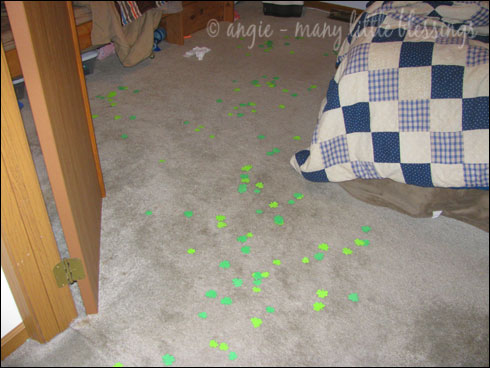 The living room floor wasn’t the only one that got decorated.  The children were all surprised to find something on the floor when they got out of bed.  These were shamrock-shaped foam pieces. 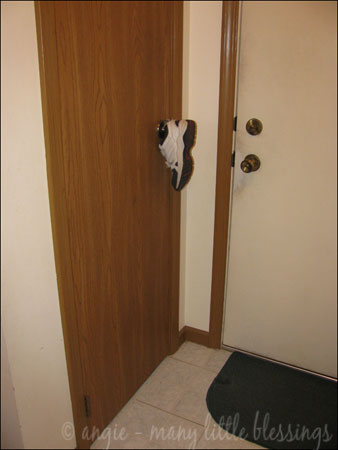 Seamus put the children’s shoes in all sorts of silly places – from the doll house to a door knob to the top of the refrigerator, as well as many other places.  This one was my favorite. 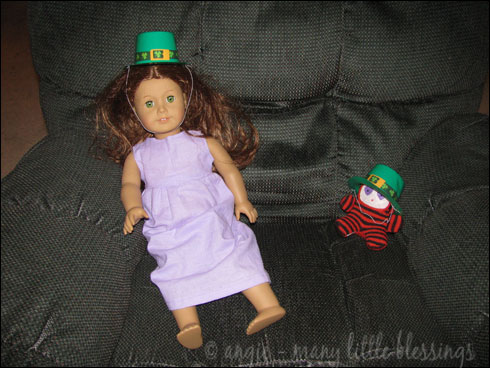 Seamus made sure that six dolls/stuffed animals joined in his fun.  They were sitting in various parts of the living room wearing green plastic St. Patrick’s Day hats. 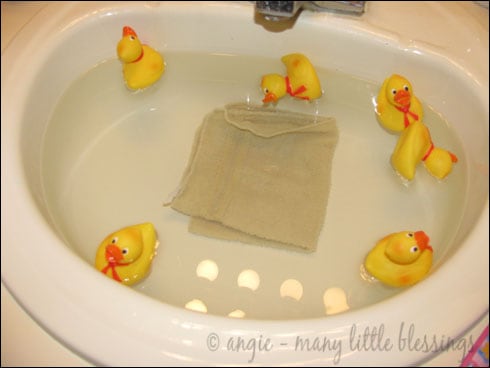 The first person to use the bathroom in the morning was quite surprised to find that Seamus had left some friends in the bathroom sink. Quack, Quack. 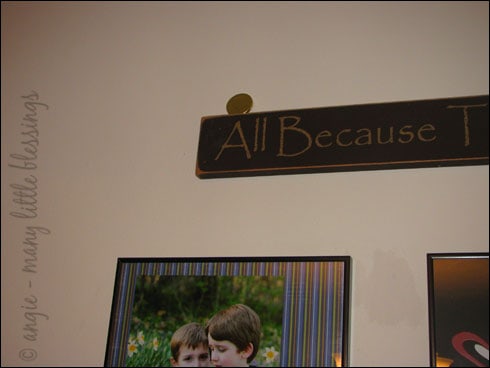 Just like the year before, he hid gold (chocolate) coins all over the house – making sure each of the kids got five coins.  He his some in odd spots, like way up on this sign on the wall.  Of course, this wasn’t the highest spot that he put them though… 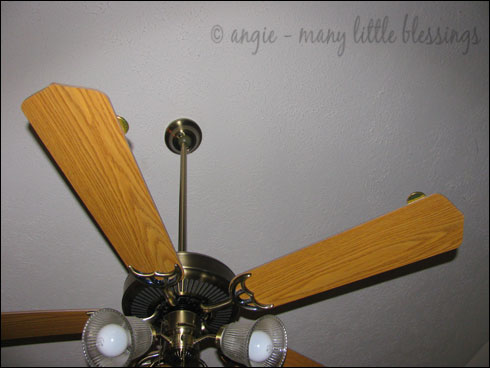 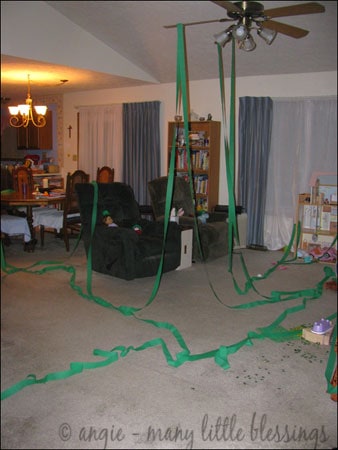 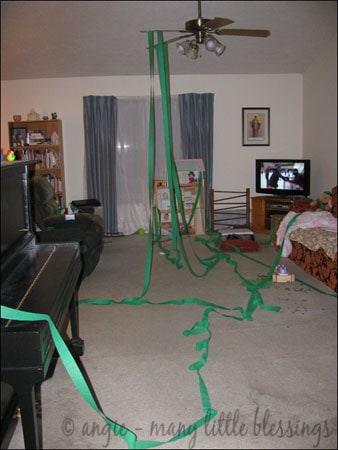 Eric said that he actually gasped when he saw all that Seamus had done in the morning.  Our living room and dining room were both littered with green streamers.  (There were also green balloons with white polka dots, but they’re not in these pictures.) 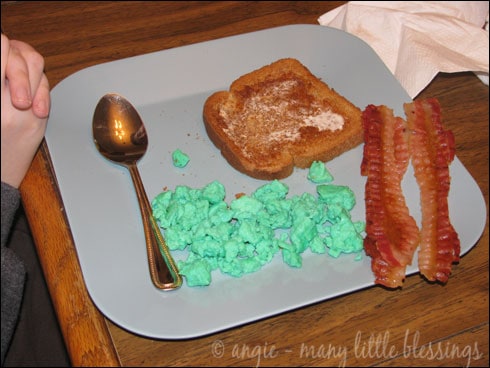 I’ll only show this photo of this trick of Seamus’ because, quite frankly, it turned my stomach.  We decided to have egg whites for breakfast, and found a strange substance in the pan we would use.  The kids said we should go ahead and make the eggs in it without washing it.  (What’s up with those kids?  Seriously?)  Our whites almost instantly turned green.

Let me tell you — I thought that I would be fine with that.  I was not.  I ate my share, but it was not fun.  As a matter of fact, I put them in my toast and wrapped it up like a sandwich.  (I know it doesn’t look too bad here, but a pan full of it is not good.)

I personally vow that Seamus will never color our eggs again.  Never.