You are here: Home / Art, Music, and Drama / 10 Art Supplies I Splurged On From Amazon
17 shares

It might sound like I do a lot of big, crazy shopping binges on Amazon.  And, while our neighbors believe that, since their dog barks every time they UPS or FedEx guy drives up, it’s not necessarily the case.  Some of that is just laziness – like knowing that I could order Post-It Note index tabs from Amazon and get them faster than waiting for my next trip to the store.  (They’re arriving tomorrow, by the way.)

This week, however, I will admit that it’s my own business money I’m spending.  After selling two paintings last week, Eric suggested that I reinvest that money into some art supplies for myself after I said one day, “Do you think that I could learn how to draw?”  Drawing, I fear, is one of those areas that I feel that I lack in.  I have really worked in the last few years to become more confident – even drawing people in two different paintings.  (I draw on my paintings, which is why I’m a pen murderer.)

I don’t want to be able to draw elaborate pictures or even very realistic things.  I just want to go on the whimsical side (like better doodling and lettering), much like most of the other art that I create.  So, it was with a lot of excitement that I took my money from my paintings, and bought…

1. Hand Lettering: Simple, Creative Styles for Cards, Scrapbooks, and More – Hand lettering is definitely one of the things I would like to be able to do better.  On the up side, at least a couple of the kids have said they also want to work on this, so this book should be a fun group activity.

2. Sakura Pigma Micron Pen Set (6 pack in black) – Eric said, “If you want to draw, you need these pens.”  Later, he found that he still had a set of them from when he was in college (the very first time around).  They still work too!  But, alas, my set was already on its way to me.  That’s just as well, since Eric stole back about half of his set.  (We found it interesting that he paid just as much for the pens at the college bookstore about 18 years ago as we saw them for at Michael’s the other night.) 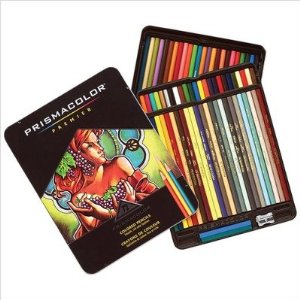 3. Prismacolor Premier Colored Pencil Set (Tin with 72 pencils) — I have looked at these for a long time, but even on sale or with a coupon at the big craft stores, I couldn’t bring myself to buy them.  Amazon was more reasonable.  (You know, as far as expensive colored pencils go.)  I’ll have you know though, they are nice.

4. Prismacolor Premier Colorless Blender Pencils – If you’re going to buy expensive pencils, you might as well spend a couple more dollars and be able to nicely blend them, huh?

5. Doodling for Papercrafters – This book has more examples (all on scrapbooking layouts) than actual instruction.  But, I like looking at the examples, and have already been having fun embellishing some scrolling designs.

6. Raw Art Journaling – I haven’t even had a chance to check this one out properly yet (it just arrived today).  But, from the examples that I saw online, I thought there might even be some things in there that I wanted to do with the art projects class that I’m teaching at our co-op this year.  So, I thought, “Hey – why not?  Good for me, good for the kids.”  (Well, not my kids.  My two that are old enough to be in my class wanted to both take other classes that were available the same hour.) 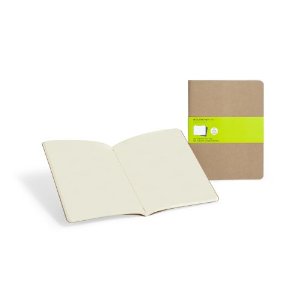 7. Moleskine Plain Cahier XLarge Journals – I had long had the small size of these on my wish list, and finally bought them a while back.  I loved them.  (I have one in my purse all the time, as well as one on my desk.)  I don’t know why I should have a strange love for these very plain notebooks, but I do.  So, I just couldn’t help myself but buy a set of large ones.

8. Moleskine Large Sketchbook – What can I say?  I clearly have a notebook problem.  I probably need a notebook intervention.  This one is hardcover and lovely.  It is intended to be where I practice drawing.  As Eric said, I just need to draw a little bit every day.

Okay, so hang on.  It seems that even though I thought I ordered enough things to fill out a top ten list, I only ordered eight things.  So, these aren’t artsy, but here are two other things that arrived from Amazon last week that have helped me to make zucchini chips and dried apples…

9. Nesco American Harvest Food Dehydrator – Inexpensive and fun!  I thought the zucchini chips were delicious!  The dried apples were too sweet for me, but Eric loved them and said they reminded him of dried apples from when he was younger.

10. Making and Using Dried Foods – Since this was my first dehydrator, it just seemed like a good idea to get a book about it.  This one got good reviews, so it seemed like an excellent candidate.

This post is linked to Top Ten Tuesday.  This post also contains a whole mess of affiliate links.  Using them doesn’t cost you any extra while you’re shopping, but it helps support this site.  Plus, it gives the neighbor dog some excitement when I use my Amazon gift cards.  Thanks!

Previous Post: « 10 Ways to Celebrate the First Day of School
Next Post: Our Homeschool Planner for My Eclectic Curriculum »